We are extremely blessed to have many missions minded kingdom workers coming to experience the mission field with us this year. In June, John and his friends (Micah, Ryan, Anna, and Kristin) from Boise Bible College came to help our ministry. Anna expressed her first mission trip as this: When I was invited to join on this adventure to Thailand, I had no idea what to expect. I have always heard crazy stories about mission trips, about the obstacles, weird foods and extreme weather and the cultural differences, so I have to admit that I was just as nervous as I was excited for it. And this trip, like any other mission trips, was definitely challenging. But it was an amazing and beautiful opportunity that I will never forget and pray that I will get to be part of again soon! I know that I will never forget the experience, the people, or the culture!


It was a blessing to have the BBC students’ great help in the many areas of AFC ministries. For the month of June, our weekends belonged to serving in the villages in the mountains of Northern Thailand, while weekdays the BBC students focused on the local kids in the surrounding areas of our center. After a week of adjusting to the climate, time, and food, the group began to teach English to a public school filled with a Buddhist context where most students are Tai Yai (Shan) refugees from Myanmar. The school is considered to be one of the poorest schools in the suburban area of Chiang Mai. Many of these kids receive only one meal a day, at the school. For many years, we have set these kids from this school as our evangelistic target. The school itself has roughly 120 students. After they had finished teaching English at the school, the student-led BBC team would play soccer with the kids. Many of the kids wait patiently for us, hoping that we can bring a good soccer ball to the school and play with them. Within a couple of days of teaching and playing soccer, the team built a strong and close bond with the local kids. Micah, a BBC student, talks about his ministry experience as such: I helped teach English at a local school which was new to me, but this opened a door to a deeper relationship with the students. There is nothing more beautiful than watching children become so focused on learning more. And not just about English, but to see a student wanting to focus more on a sermon about Jesus than his friends around him. I was so blessed to be a part of this team, acting as the hands and feet of the Church and planting seeds that God can grow into beautiful relationships with Him. 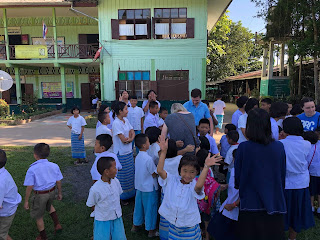 During the first weekend, the group went and gave testimonies at a Lisu church called Kong Nguen. This church, in the past, was located near the red light districts of Chiang Mai and did a lot of ministries with the lost in that area. The church has since moved to a new area because they now have a permanent building where they can meet and worship. Many of the members sell clothes and trinkets at the night market and some work in construction and manual labor. AFC has been a part of and occasionally go and preach and teach at this church. Kong Nguen Church members were very encouraged by the BBC students’ testimonies. On the second weekend, we went up to a village called Huey Sai to spend time with the Lisu kids at the youth hostel there. The Lisu kids were introduced to the BBC students and were a bit reserved at first. The team however managed to open up ways to interact with the kids by teaching English, singing songs, dancing and playing the Lisu kids’ favorite types of games. By the end of the weekend, another strong bond was made between the Lisu kids and the BBC student-led team. Ryan, a part of the BBC team stated: Through these experiences God has pushed us out of our comfort zones and made us try new things in different cultures. Through this ministry I was able to see God working throughout Thailand and hear about all the opportunities he is opening up to this great family in Burma, Laos, and China. There is so much work that can be done through this ministry, and they are in need of Kingdom Workers to come alongside their ministry and serve.

The following weekend, we went up to Chiang Dao to visit two Lisu churches at Huey Ko and Mea Ka where the group got to share their testimonies and had the opportunity to preach and teach and spend time with the villagers and their children. The group had the opportunity to be taught many of the games that the Lisu children played there, also. They played for a couple hours throwing balls made out of paper, rocks, and rubber bands. For the little ones who could not play catch, the group also played on a swing set and chased after the children around all evening. Missions can sometimes be uncomfortable and the BBC team got to experience this when they had to sleep on the floor behind the church filled with mosquito nets to keep the mosquitos and critters out; still, lots of mosquitoes were buzzing around us, waiting to attack at any chance they can get. And even when there were no showers available in the morning, the team didn’t complain. What a wonderful team!

Another important highlight of the month was that we had our yearly family prayer-worship gathering at our house. Many ethnic people groups attended including Lisu, Lahu, Tai Yai, Thai, US and Burmese. Some of the kids from the local Thai school that got to spend time with the BBC team came by as well. As Kristin, a recent BBC graduate on the team, states:  It was a great reminder that worshipping God can be done in all languages and all cultures! We are ONE church who worship and love the SAME God. It was so incredible to worship alongside different cultures and languages! I really think that’s the coolest thing ever. My team and I were able to share our testimonies and sing songs in front of the church.  It was a huge blessing to be able to worship with so many people, to have a delicious meal provided, and to have people come over us and pray for our mission, the family, and God’s Kingdom to continually expand. It’s not always easy, we face many trials and we know that we need God first and foremost and so we thank you, our brothers and sisters in Christ, who continually pray and encourage us.


After this productive month, besides Stephen and Isaac (who took care of the house and got ready for schooling), the rest of the group went down to the beach near Bangkok. It was a great break for them when they got to explore the royal temple and learn more about the history of Thailand. The night they had reached the beach, John had the opportunity to surprise his girlfriend and propose to her. Everyone was excited to hear her say “Yes!” and so, congratulations to John and Anna on their engagement! We love you and we are very proud of you.

Our family has had a wonderful time together. Now that John is back, we feel like a full and joyous family once again. Stephen has continually been working on his commentaries and finding opportunities to teach the BBC students about the culture of Asia and valuable insight about missions and Bible. Without him, the BBC students would not have been able to travel to so many different villages and schools in order to advance God’s Kingdom. Mary has continued to play a major role this month. She cooks nonstop and prepares many events at the house including the recent prayer-gathering event, even with reoccurring back pains. Prayers for her as she is currently going through a lot of pain in her back. Nick has been preparing a sermon to preach at a Thai church in the city, where he has been more involved while in Thailand. Please also pray for Nick’s knee as he was injured while playing soccer with the kids from the local school. Isaac has done a wonderful job at his school this year, earning himself the top academic student of his grade and also winning the debate competition at the school. John has spent the entire month showing his friends the beauty of Thailand and the mission’s trip. After the team left, he is now starting to continue in teaching English, going to villages and preaching, and learning the culture and language of the Lisu people. Thank you all for your work and encouragement in and through us. We cannot thank you enough for what each and every one of you do for this missions. Thank you supporters, and most importantly, all honor goes to God because His Kingdom continues to expand to this day.