Not the Macedonian, But the Laotian Called!

Luke wrote in Acts 16:9 “A vision appeared to Paul in the night: a man of Macedonia was standing and appealing to him and saying ‘Come over to Macedonia and help us’” (NASB).

Stephen and Nick had been asked to make a trip to Laos for many years. Finally, in the beginning of April, they were able to make a survey trip to Laos for a week. The native evangelists, Ben and Seng, work with the locals in Laos and have been doing a wonderful job in the country for His Glory. You may know that Laos is an extremely difficult country to do ministry or evangelism. Many missionaries go into the country with little success and some even face life-threatening dangers. On that note, the Lord has blessed us greatly on this trip. We were able to meet and even dine with very powerful government leaders who happened to be the relatives of the evangelists. We visited many villages and experienced a little part of their everyday life. More importantly, during the trip, we were able to also experience ministry with the evangelists; one lady came to the house to ask for prayers and wanted to become a Christian because she wanted to be free from evil spirits. It was a very successful trip, and if the Lord is willing, we will be more involved in the ministries in Laos, particularly in the areas of teaching the leaders with God’s Word, the Scripture and the wholistic ministry — transforming Christians in every aspects of their life: spiritual, mental, physical, cultural, social, agricultural, economical, etc. 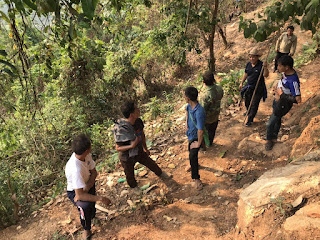 After the trip to Laos, several Chinese Lisu leaders came to Thailand for a conference. We hosted them while they were here. We are very blessed to have this relationship with these leaders from China. Whenever we go to China, these are some of the folks who take care of us and help make our ministry in China a success. During this time, they were able to join us for Easter service at a Lisu church where Stephen preached the importance of Easter and the meaning that it holds. One of the Chinese ladies that joined the church service stated that this was her first time in a church.
April also had a little break for Stephen and Mary. After the Chinese leaders left, the parents went on a rare trip together to Vietnam for the first time. Mary has been sick on and off for several years and so Stephen wanted to treat Mary to a few days in Vietnam. They both enjoyed the trip very much and it refreshed them. It’s not every day that they are able to rest, away from the children and work. This was a blessed time for them. 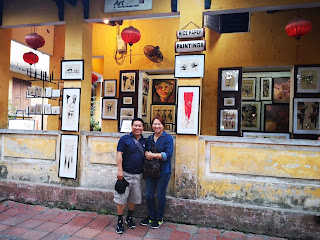 After they returned to Thailand, Stephen was requested to teach the book of Revelation from his commentary for a week to about 70 Lahu from various churches and villages at Nong Kio, a Lahu village. The Lahu are an ethnic group living in the mountains similar to the Lisu. Most of the Lahu in this village in particular migrated from China during the 1960-70s because of their faith in Christ. It was common for many ethnic groups of people who believe in Christ but yet still hold on and practice their traditional beliefs, for instance, black magic, superstitions, etc. The true reason behind this false impression is that most of them have a very limited knowledge of the Word of God, the Scripture. With some of the church leaders, Stephen started and continued teaching courses of Bible study in this village for several years now. Praise the Lord, the Word of the Lord has transformed the life of the people. Today, this village has become one of the healthiest churches in the area, currently with over 30 evangelists sent out to serve the Lord throughout villages in Northern Thailand, Myanmar, and China. This is the living testimony that God's Word is the Living Word. Amen! 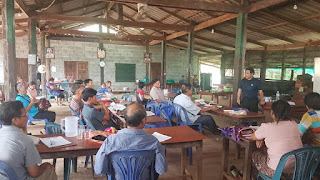 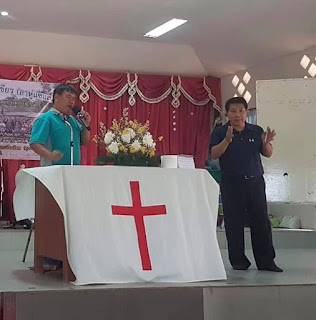 Speaking of teaching the Bible, Stephen has been requested from one of the Bible colleges from Myanmar to equip the College’s professors and church leaders with the Word of God. If this is God’s Will, it will take about 4 years to complete the program and in each year, at least 3 conferences will be offered and each time will be about 2-3 week long. Please lift up this ministry in your prayers because we don’t know about tomorrow, but we know who holds tomorrow! Concerning commentaries, Stephen plans to complete the book of Matthew within the next quarter of months. At the moment, he is comparing his exegetical notes with popular scholars. The commentary ministry is going very well. The ultimate goal for this ministry is to help individuals and remote churches to be rooted in the Scripture.

The family is doing well. Isaac is on his break, but will soon go back to school. He has been enjoying his time swimming on occasion. Nick has been involved with a local Thai church and taught some and also joined the church in their ministry in Thailand. Becky is doing well. We are all excited for May because John and a group of his classmates from Boise Bible College will come to Thailand to do a short term mission trip with AFC, they will be experiencing missions first-handed. Please be praying for them. We thank you all for your partnership and support. Your prayers have not gone unnoticed. We thank God for each and every one of you for being such a blessing in our lives and helping us advance the Kingdom of God!

April usually brings showers, but this year it has been extremely hot. On top of that, Chiang Mai is facing one of the highest pollution levels in its history. Many locals intentionally set forests on fire in order for a special type of mushroom to grow after the fire settled; these mushrooms are popular because it’s rare and a big source of income, but it becomes a huge toll on many people. The number of people hospitalized for severe allergies and other illnesses rose significantly since the burning began about two months ago. Usually the rain that comes in April settles the smoke particles, but rain never came. Many locals have gone to temples in order to chant and call for rain; we know that our God is the one who provides rejuvenating cool rain. Please pray that He provides us with some rain.