GOD IS WITH US!

In the movie Exodus, which is a Hollywood’s portrayal of a bible story, though a lot of the movie wasn’t biblical the ending was wonderful. There was a scene of Moses giving a speech to the Israelites as they faced the Red Sea while the Egyptian Army closed in behind them. As the water receded, the people were still afraid to cross the Red Sea, and Moses said: “do not be afraid, God is with us!” This scene was awesome because this is absolutely true! God is with us! We have faced spiritual attacks these past several months as Satan tried to bombard our family with illnesses, discouragement, and even challenges. We must continue onward with the missions because God is with us and we should not fear whatever comes on our way.

It has been three consecutive weeks that we have gone through the Bible starting from Genesis hopefully to Revelation every Thursday-Saturday from 9am-3pm with our inner relatives in ChiangMai. In fact, these relatives were among the first group of Thailand-Lisu who accepted Jesus Christ. They are the first generation of Christians who converted from evil spirit worship into Christianity. However, due to their jobs; some of them in the Thai government, they hardly had a chance to learn God’s Word. Of course, they heard the Word of God at church services, some of them even had served as elders in churches among some denominations, but they always felt that they have never been rooted in His Word. After their retirement from their jobs, they have an urge to learn the Bible with Stephen. So, Stephen has offered a class on the introduction to the Bible. We are now on the book of Numbers. In all the books so far, we have seen that even when man fails, God is always faithful. Please pray for us as we journey through the entire Bible.

Beside of preaching in different churches, Stephen just completed teaching the book of Hebrews via a messaging application with his audiences. Many people throughout Northern Myanmar and Western China are enrolling in this program. He set those followers into 5 different groups. Each group has a key person who directly studies with Stephen through a phone application, each day. After these key leaders had completed a class with Stephen, they, in turn, taught or preached to their followers. Each of these key leaders has around 300-550 followers. By doing this, each follower can study the Word of God at their own time, location, and pace. We are praying, if God is willing, to improve this messaging application from audio into mp4 (video) so that the people will be able to visualize the teaching materials in an even more personal setting. 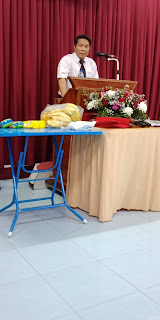 Sadly, in Myanmar, things are getting worse for the ordinary people. There are still battles here and there, sometimes in the form of terrorists, wearing citizen clothes, not military uniform and shooting at the crowds. Such a type of fighting impacts the ordinary people who need to go out in their daily routine and come back in the evening with the hope of reaching home with food for their families. Now, many ordinary people are afraid to go out to find food to feed their families. Unfortunately, some people had never made it back to their homes and families. In the midst of such circumstances, our ministry for the orphanage in Danai, west of Myitkyina has received a tremendous blessing from many of you. We are planning to build a wooden home which will be able to house around 20-30 children by the end of this rainy season. At the moment, the temporary building we have is made from bamboo. The rainwater would sometimes get through the bamboo walls. Many times while the children are trying to sleep in the middle of the night, these poor children become soaked. Therefore, the new building would have to be made of good quality wood so that the orphanage would be the same theme as the houses in the area; we want the children’s home to be built in the context of Northern Myanmar homes so that it wouldn’t be flashy and cause the neighborhood to stumble. Our gratitude goes out especially to those who promise to support this need financially. You are the answer to our prayers. May our Living God bless you! Right now, we are trying to raise funds so that we could support another 10 children who are lacking monthly support which goes to education, food, toiletries, clothes, etc. Monthly, we are needing $50 per child to provide for their needs. We hope that the children would be able to see the love of God through us and hope that we can lead them to follow Christ all their life.

Mary is a very important person in our family; as the mom of the house, she holds the family together and oversees the many projects at home. Unfortunately, this past month, it was very hard to see her face some health issues. Mary was in the hospital for several days for a kidney infection and then she had to recover for some time at home. After a couple weeks, she was finally back to good health. Praise the Lord!

Isaac was elected from his school to compete at a regional English skills event. Being that the school told us with such short notice, Isaac was only able to prepare for about a week while many that compete have been preparing since last year. The result came out that Isaac got second place! We are very proud of Isaac for his outstanding achievement. Becky has been teaching Isaac in Math and English every evening, so she did a great job preparing Isaac. Beside of being equipped with his dad, Nick has been meeting with several of his contacts in order to try to help bring jobs and skills to the Lisu in Myanmar. So, he has been trying to grow crops like stevia and other plants to study how to grow and care for the plants so that maybe the Lisu in Myanmar could benefit from growing such plants to make some income for themselves.

John has just completed his internship at McMinnville, Oregon and flew back to Boise to continue his junior year at Boise Bible College. He says that the experience and all the relationships were priceless! He was able to serve in the children, youth, small group, and many other areas of ministry at Adventure Christian Church. Currently, he is working on transitioning back into school and maybe taking some leadership responsibilities at school! Please continue to pray and encourage him as he is loaded with 20 credits of school plus the workload and responsibilities that come into play throughout the year!

Please lift up Stephen’s relatives in your prayers. Even though, most of his sibling and relatives were the first group of Christians among the Lisu people in Thailand accepting Jesus Christ, some of them have faded away from their faith. One of Stephen’s sisters had been distant from God for a very long time. One day, recently, she was blinded and could only see clouds and bright lights even when she covered her eyes with her hands. She was extremely terrified so she came to Stephen because she needed God in her life. This is a very promising event and we thank God for bringing her back. We pray that many of our relatives would draw near to God through Jesus Christ, the Redeemer.