What else could be the reason for how we grow up today, other than the breast milk
Take into consideration, what else could be comparable to the breast milk
Mother, I miss the milk you once breastfed me
The bloodstream of hers turns into milk for us
The value of breast milk will be every child’s lasting reminder
It is compared as the far-flung sky and heavier than the earth
No matter what we have done and how hard we have tried
Nothing can compensate for one drop of milk and the kindness of mothers (translator unknown).

This August becomes the most meaningful Mother’s Day for our family because of the family reunion with Nick.  This is the great gift that God has poured to our family.  There is nothing more joyful to the family, Mary in particular, for her Mother’s Day, than this family reunion.  Nick is now at home (though he may not feel it) and on the mission field with the family.  For almost 20 years, our family has never resided in any place for more than 3 years.  We have moved around because of ministry, and for a very short time during those years, the whole family lived together as a whole family.  Almost 6 years, except during some summers, Nick has been away due to his preparation for the ministry.  Now he is in Thailand perhaps, we will have time to catch up with each other once more. 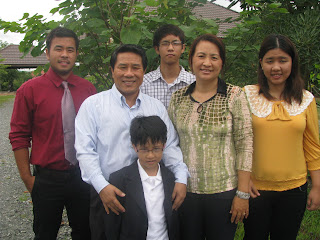 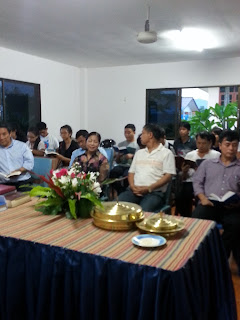 The welcoming service for Nick

Nick is now in the process of re-adjusting the Thai and Lisu cultures since he grew up in the USA most of his life.  First, he has to reconnect with his Thai and Lisu cultures and languages.  Also, he has to rebuild his relationship not only with his family, but also with his whole clan, our clan is one of the biggest clans among the Thailand-Lisu.  His dad is already planning to equip him with the mission works, starting from Thailand, China, and Burma.  While his mom is spending good quality time with Nick, Dad is planning to put Nick a pack load of ministry.  Nick is now teaching English to Burmese students of AIS.  The students have really enjoyed the class.  He is also scheduled to join his dad to go to China this upcoming August 26-September 2. 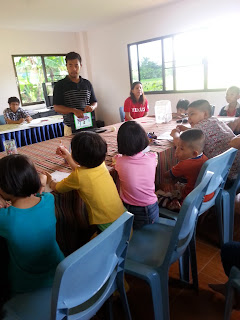 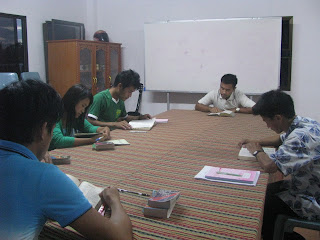 Stephen has been invited to attend and being one of the key guest speakers at Lisu cultural conference under the auspices of the Chinese government.  He has been asked to represent Christians and give a speech on Christianity and Lisu culture.  Stephen will lead a group of Lisu from Thailand, 21 all together, to attend this conference.  Stephen is attempting his best to reshape the Chinese mindset on Christianity.  As you may have known, many unbelievers throughout Southeast Asia and China condemn Christianity as a cultural destroyer.  Some even accuse believers as western dogs serving the western world.  Stephen has demonstrated the alternative image in various occasions with cultural sensitivity, but never compromise with the Word of God. Your prayers for the great spiritual impact upon people who will be around us during this trip would be much appreciated.

We always praise the Lord for our mission works in Chinese, though it is a gradual process, not as fast paced as we have expected, in winning many souls (If you follow our mission works in China in the past two decades, you have heard that God had blessed our mission works abundantly, particularly at the southern part of Yunnan province.  In the past two-three years we have moved our evangelistic work to the northern part of Yunnan province, at the border area of the former Tibetan area, emphasizing to the unreached area).  However, we give thanks to God for many prominent women and their children, except their husbands, for accepting Christ.  As I mentioned earlier, many of local leaders are strongly desire to accept Christ, but because of the law, they are forbidden.  The Chinese law enacts that every local leader must solely be a member of communist party.  In China, communism is not only under the political, but also religious criteria.  One of the local leaders in the area whispered at one time to Stephen that he drives his wife and son to church every Sunday.  While they were inside the church, he sat in his car and waited for them throughout the church service.  Please continue to lift them in your daily prayers so that one day they will have more freedom to worship the Living Lord and God.

Recently, we have shared with you the fruits which bear among the students of Asia International Seminary (AIS), particularly, students from Burma.  God has moved with these students in advancing His Kingdom in Burma through evangelism, teaching and equipping other Christian leaders.  Ah Lay Bo, in particular, has carried out the Great Commission to the lost people who live in the restricted area and turning many of them to Christ.  He is also working as a church consultant to almost 50 churches in central Burma through conducting various conferences with the word of God, teaching Bible at short-term Bible training centers throughout Burma; and mobilizing those churches to engage with the Great Commission to the lost souls at their neighboring areas starting with the Lisu, Palong, and Shan people.  Every time when we hear about their faithfulness to God’s Word and their bearing spiritual fruits in their endeavor ministry, we have been encouraged, we hope it does to you as well, to equip more Christian leaders to be rooted in God’s Word, rather than human opinions and traditions, so that they will be able to teach, train and equip other people likewise.  We also cherish this endless partnership with these students because through them we are now able to easily conduct several leadership conferences in Burma with hundreds of church leaders throughout central and north Burma in the area of Myitkyina.

Indeed, all our students from Burma are full time ministers and evangelists, but none of them are a paid minister.  As you may know, ministers and evangelists in Burma receive only the once-a- year- help from their congregations with rice.  Paying cash is beyond the abilities of their congregations.  Only because of God’s calling that keeps these ministers and evangelists to continue in their faithful services.  Moreover, most of our evangelistic areas are located in the restricted areas where the main cash crop is opium and many of our new converts are struggling with this kind of business.  We are very sensitive with this issue and strongly prohibit our evangelists to get involved, or even taking an offering with such crops, so that our mission works will not be a stumbling-block in advancing His Kingdom.

The first group of Burmese students, mostly from the central of Burma, is now on the verge of completing their studying courses.  Two more blocks of time, this first group of students will complete their Biblical courses.  For the year of 2013, the class is set for them at the last week of October to the end of November.  Recently, we had hardly rejected a strong request from Christian leaders from the north of Burma, Myitkyina, in particular.  With an extra mile effort, we are now offering our exegetical courses to the second group of students from Burma during August 20-October 10.  They will return to their homes and to continue their ministries after each block of time is over.  At this moment, it seems that they are really excited and enjoy their classes. 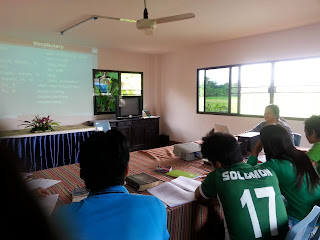 Sanduan is teaching Greek to Burmese student of AIS

Our gratitude goes to all your faithfulness in being the blessing channel of the faithful God so that he is able to demonstrate his faithfulness.  Much appreciated for your faithful partnership in advancing the gospel of Jesus’ redemption the lost souls and expanding his Kingdom in Southeast Asia and China. 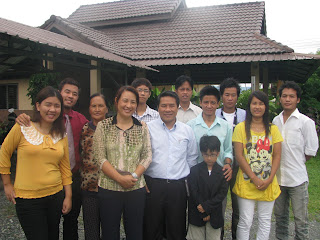 The family with the students
Prayer  requests:
1.      Mission works in China
2.      Equipping Christian leaders at AIS
3.      Leadership conference in Burma in this upcoming October
4.      New opportunity for mission works in Laos
5.      Wongs’ family (health and children’s education) and their co-workers