The Wongs Lifeline on July 2013

We always have various reasons to praise our Living God and Lord.  We continue to thank Him for blessing our mission endeavors by adding more and more new converts in regular basis. Stephen and John just came back from their mission trip to village by driving through drenching monsoon storms in order to baptize new converts.  Praise the Lord! 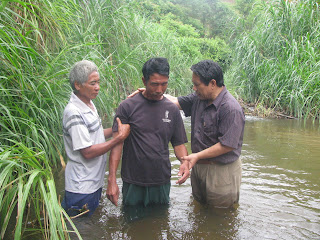 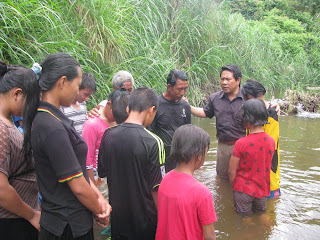 In the face of the false teaching in Ephesus, Paul instructed Timothy in 2 Timothy 4:2 with four imperatives; preach, be ready (stand by), expose, rebuke, and exhort.  Particularly, the second imperative is followed by two Greek adverbs; eukairos and akairos, which is a paired wordplay on the word kairos (season).  One biblical scholar translates this phrase somewhat like this: being ready both at convenient and inconvenient times.  Imagine living in the context of people worshipping idols, evil spirits, mountains, rivers, trees and rocks like Thailand which is located on the torrential monsoon zone, probably Paul’s exhortation can be contextualized as this: be ready in monsoon and out of monsoon season.

During this monsoon season, the emphasis of our ministry has shifted from evangelism (out door ministry) to equipping Christian leaders with God’s Word (indoor ministry).  In the next couple of weeks, students from Burma or Myanmar will be here in Chiangmai for a block of time.  All these students, as state earlier, are presently Christian ministers, evangelists, or teachers.  Since they are already active in ministry, they are able to take time out from their ministries during this monsoon season, when most of their church members are busy in working at their farms.  They will be with us for a month and a half studying God’s Word at AIS (Asia International Seminary) so that they would be rooted firmly with God’s Word.  Please keep us in your prayers so that we will continue to be faithful in ministry with the emphasis of God’s Word, rather than human’s opinion, whether in evangelism, equipping or empowering the church leaders.  Our appreciation goes to those who have given an extra to make this ministry of making disciples through teaching God’s Word possible.

There are two major obstacles for our evangelistic works in Burma.  First, the evangelistic area, particularly Doi Mo, as you may recall, used to be the hub of opium cultivation and business. As a matter of fact, according to UN reports, Burma is the second largest opium grower in the world after Afghanistan.  The Shan and Kachin states in Burma are the major sources of most of the opium from Burma.  Second, the religious discrimination in Burma is getting intense.  According to one of the Human Rights Organizations in Burma, the Burmese government openly discriminates against ethnic and religious minorities such as Christians and Muslims.  Therefore, the UN urges the Burmese government to urgently pursue legal and institutional reforms including reforming local orders and national laws that discriminate along lines of ethnicity and religion.

Few days ago, we received a prayer request from our friend in Burma mentioning about the new believers in Doi Mo, who have been forced by local leaders to offer daily food to Buddhist monks.  As you may know, every morning Buddhist monks in Burma as well as in Thailand walk from their Buddhist temple passing house after house to receive food offering from people living nearby the temple.  This is their social and religious norm!  In the recent months, during and after our evangelistic trip to the area of Doi Mo, many people have converted to Christ.  The conversion has changed their daily life routine.  Apparently, the impact has caused Buddhist monks in short of their daily food.  The Buddhist monks have complained about the lack of their daily food.  The local authorities then have acted by forcing these new believers to offer daily food to those Buddhist monks.  When these Christians rejected to do so, they are now facing religious discrimination, social and legal oppression and perhaps soon persecution.  Please keep these new converts in your prayers so that they will be strong in their faith in fighting with this trail and temptation.

Recently, we have received a request to extent our mission works into Laos.  We are now on the stage of praying for seeking God’s Will.  For we have heard and seen, as a matter of fact, many of our friends, who are Lahu and Ahka evangelists from Thailand were put into prison in the past year because of their evangelistic works in Laos.  Now they have withdrawn most of their mission works from Laos.  This is a very challenging call!  We have foreseen the risk of this calling.

Laos is one of the five remaining Communist nations that continue to impose undue restrictions on religious freedom. While the national government claims to allow Christians to worship freely, many provincial and village level officials continue to harass and threaten Christians. Many new believers have been forced to leave or even bar to returning their homes and resettle elsewhere after their conversion.  If Christians refuse to move, they are sometimes ostracized by the community and may face further harassment by the authorities.

At this moment, Yasa has initialed the mission works for Lahu people in Laos by taking 3 Lahu boys and a girl from Laos and training them at Lahu Bible Training Center in Chiangdao.  Our mission is now praying and brain-storming whether we should following up this initial ministry into the full extension of our mission works inside Laos.  Much appreciated your prayers for this challenging ministry! 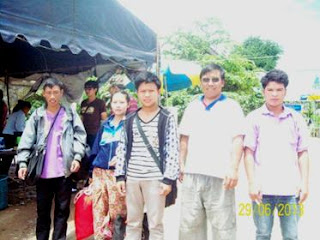 Yasa with Lahu students from Laos.

The Wongs in Update

Every one of the Wongs is doing well.  Stephen has sacrificed most of his time to continue his exegetical study on the Gospel of John.  He has studied in depth this Gospel since 1997.  He is now compiling them for a lecture note so that he will be able to teach his students in this upcoming November 2013.  He is also revisiting his works on the Epistle to the Philippians so that he will be able to teach on the topic of “a Christo-mindset of leaders and evangelists” based on this epistle at the Christian leadership conference in Burma on this upcoming October 2013.  Mary is one of the busiest moms.  She is maneuvering both family and ministry into the right shape.  Beside of taking care of children, she is, as usual, not only preparing the rice-field to be ready for the next crop, but also a place to be ready for the Burmese students.  She is the real heroin!  Again this year, Becky has received recognition as one of the outstanding students from her university.  John is on summer break.  He is enjoying taking computer lessons via internet.  Occasionally, he joins his dad to make evangelistic trips to various places.  Isaac is enjoying studying English, Thai and Chinese.  He loves learning a Hallelujah chorus with his grandma and enjoying preaching and teaching Bible stories at family devotions.  Nick is working on his ministry supports so that he will be able to be a missionary for the youth in the Southeast Asia and China.  Many youth Christian leaders, particularly in central Burma, have anticipated his returning and working with him in order to mobilize other youth in carrying out the Gospel of Jesus’ redemption to the lost people and expanding His Kingdom in the region.  Nick is planning to be in Thailand this coming fall.  If God is willing, he is hoping to teach at the leadership conference in Burma, emphasis on youth, at this upcoming October 2013. 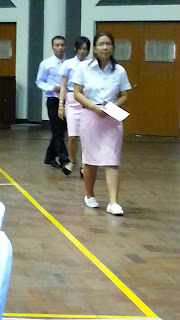 Becky on her recognition day 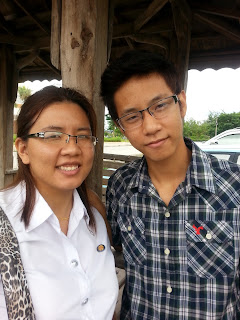 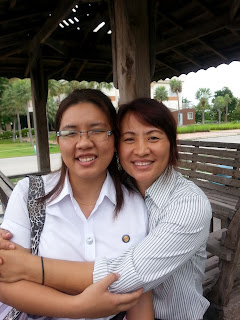 We are very thankful for your faithful partnership with us in carrying out the Great Commission to the lost people in Southeast Asia and China as well as equipping and empowering Christian leaders with the Word of God.  May all your partnering gifts become an investment that reaps spiritual dividends in Jesus Christ!

PS. John is attending at Grace International School.  The is a Christian School mainly for missionary kids.  On July 9, 2013, the verdict of the appellate court in Thailand disfavored the school.  The school has to turn over the property that was part of the former owner, pay various fees, and restore the facility to the original condition (further information see at: http://www.gisthailand.org)   The GIS really needs prayers at the moment and pray also this verdict will not cause any further difficulty for John’s emotion and education.