CHRIST IS THE ONLY WAY!

We are starting the year off very strong, even as we face hardship with our resources; we still give God the glory! He has led us for 30 years and we continue to see His Works through us and all around us. We are very encouraged and thankful for all of our friends and church families who have been working with us, one way or another, so that AFC, led by God, can advance against the kingdom of darkness. We see how Satan really wants to destroy our missions in every possible way, but thank God that we don’t rely on our own strength but on the might of our Living God!

Stephen and Mary embarked on a trip to Myanmar late January in order to officially open the school in Myanmar as well as pray over this ministry. There are many students wanting to learn at our school which the classes will begin soon. This school building will be a base for operations in Myanmar. We are currently in a network of churches that ranges over 200, with the total members numbering in the hundreds of thousands. We will provide bible classes, English classes with the Bible, a virtual classroom (so that teachers from far away could teach remotely), and also a place to stay for Kingdom workers. We believe that we are helping with developmental growth and also, more importantly, spiritual growth.

While in Myanmar, Stephen had the opportunity to teach the Bible in Myitkyina, Mandalay, and Mogok. In Myitkyina, Stephen and Mary met several of Asia International Seminary’s alumni who are faithfully serving at several ministries. For example, Sarmuekhi leads and oversees over 90 churches throughout Kachin state of Myanmar. These churches are affiliated as a group while each of the churches has their own authority. Moses teaches at a Bible college and serves as a preacher at his home church. Ahmosi also serves as an assistant preacher at one of the Assembly of God churches in Myitkyina. Last but not least, Solomo has gone to the border of Myanmar and China to evangelize among animistic villages that are growing opium as the main cash crop. Listening about the mission works from these young servants of God, we continue to praise God unceasingly. Our endeavor in the past several years has started producing spiritual fruits. In fact, there are many more students we have met in the past few years, and we believe they are all serving God faithfully throughout Myanmar, Thailand and even in China.

While in Mandalay, Stephen taught at a Lisu friend, Jeremy’s ministry, to the Burmese Buddhists. After one of the classes, a Burmese man stood up and said he believes and asked to be baptized. Praise the Lord! The sad part was that during the teaching, Stephen found out that his audiences had no Bibles in their language. They need around 1,000 Burmese Bibles. We will distribute these Bibles only to the new converts or non-believers. Much appreciated for your prayers on this need. Please also lift Jeremy and his family up as they are carrying out the Great Commission to the Burmese Buddhists in Mandalay. Through his inner city ministry, in the past five years, over 200 Burmese have converted from Buddhism into Christ’s Kingdom.


While in Mogok, Stephen made a visit to Lisu churches at the very remote areas and also a Shan village. As you may have known, the Shan people are one of the most difficult ethnic groups of people to evangelize to. Their hardening heart to the Gospel is well-known. They are still considered to be an unreached people group. Please lift up these people in your prayers!


As usual, Stephen has been working tirelessly on his NT commentary. He is now researching in depth on the Gospel of Matthew. In fact, several of his commentaries, for example, the First Corinthians is in the process of being published. The Second Corinthians and the Gospel of John are waiting in line for the next. Stephen, with his students, continues to teach even on a messaging application called Wechat which is popular amongst the Chinese. Currently, one of his students is teaching Revelation by using Stephen’s commentary to a group of around 450 Chinese. Speaking of Chinese Lisu, one of the leaders from China is currently with us in Thailand working on encoding the Lisu language with Stephen. There are actually different Lisu written text and this particular Lisu text is highly demanded among the Chinese Lisu because it’s a way to preserve their culture. Stephen views this as a continual building of relationship bonds with the Lisu in China. Several of our non-Christian friends from China are now bowing their heads and praying with us before we eat. This may be small, but it is actually huge because these people were the same people that used to persecute Christians. They have a deep respect for our God and some have even seen our prayers become answered. God is slowly transforming the Chinese Lisu to fear and obey Him. 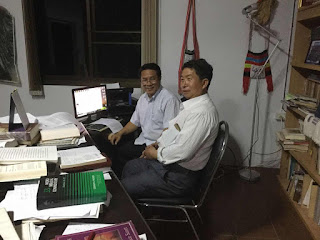 The family is doing well. Isaac had a performance act at school and he did a phenomenal job; he gave a little speech about the Philippines in front of parents and teachers. His class also performed several dances and it was a joy to watch. Mary started planting rice again. The rice saplings are looking very nice so far. Becky cannot wait to go teach in Myanmar, so she is currently practicing her lessons with a student. Nick has been more and more involved at a Thai church in Chiang Mai, he is also currently teaching part time at Mae Jo University. John is still raising funds with his college friends for the trip to Thailand this summer. They are very excited to come! As for Thailand, this month there has been a big issue with pollution in the air due to the burning of trees and fields in the surrounding areas. Thailand will also have a long awaited election next month.
Please keep our family in your prayers. Thank you again for your continual prayers and support, without you, none of this is possible. Most importantly, we thank God for His provisions and what He has been doing through us! Amen.
Posted by stephen at 9:09 PM