Making Differences For the Lord!

Thank you so much for your prayers, love and support us for carrying out the Great Commission to the lost souls and making disciples in Southeast East Asia and China.
In the past month, Stephen made a quick missions trip to Northern Myanmar to teach the book of Revelation to a group of Christian leaders from various denominations and the Doctrine of Grace to students at Jamaitee Bible Center. He even went up to Putao to find the place to establish the rehab center the drug addicts. Several thousands of youth in Putao area are addicted to particularly heroin. Some streets are filled with people by youth at night. Needles are lying around everywhere. The sad part is that these youth are considered to be Christians. They have grown up inside the churches. Their families were known to be Christians for several generations. 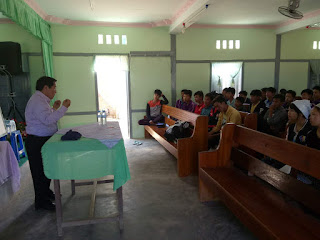 He also participated at the cultural festival in Putao and met and had gained close relationships with many political and cultural leaders in Myanmar. He helped the leaders from China and Myanmar to meet each other so that they would further their relationship with one another. He really became an intermediary.

During this mission trip, Stephen did a ground breaking for building a home for the orphans particularly among the displaced people due to the ongoing fighting in Kachin State of Myanmar. It was another real blessed trip. Praise the Lord!

Nick has been to Myanmar on many occasions but this was the first time he has ever experienced such an intense emotion. He started the week visiting the youth in the area. He visited Sayleyet, one of the leaders in Myitkyina. At his house, he teaches some of the youth in the area just about every evening. There were about 4 orphans in the group of youth that he teaches; he was able to join their worship services almost every night.

Nick’s main focus was on the children at Nicodi refugee camp (village). On one of the days, several leaders from the area and Nick threw a little feast for the 150+ children living at Nicodi village. They woke up very early and went to the market to buy ingredients to make rice and pork soup. Nick is very blessed by brothers and sisters in Christ that donated money in order for them to cover the cost for hosting this party for the children.


When they arrived at the village, this is Nick’s remarking:

My heart sank because I saw signs of poverty and hardship everywhere. The villagers were wearing torn and rugged clothes, the village had no electricity or running water, and you could just feel a sense of hopelessness in the air. But from the dusty roads to the tattered houses, I could see that they still held their Faith in Christ. The people valued their church building because that was a place where the 300+ people gathered to worship.

We reached the village at about 1pm and started to cook the pork soup and rice. At about 3:30pm, an old pickup truck carried about 30 kids came and dropped off the first bunch of kids at the village before leaving for the next 5 groups at the school in a nearby village. The kids smelled the food and all came and gathered around; many had extremely old clothes on and had a look of sorrow in their eyes. We began with some games and teaching worship songs to the kids; they began to smile. After that, I gave a little word of encouragement for the kids (along with the adults who joined). Afterwards, we all sat down on the grassy field just behind the church and enjoyed the meal together. The party was intended for the children, but many of their parents came to watch the kids eat so we couldn’t turn them away. Tears rolled down my eyes as I saw glimpses of laughter and joy in this place.

This was only one of the many Lisu refugee villages; I was unable to go to other villages because of the continued war. As the week progressed, I visited several more youth in the area; I felt compassion for the people here so much that I forgot about my birthday during this trip. This trip was absolutely eye opening because when I went to Myanmar last year, there wasn’t any war or displaced people. Even more heart breaking was that two days after I came back to Thailand, I heard from Sayleyet, that his pregnant wife was just kidnapped. I felt deep pain and sorrow because I was just in Myanmar and met and congratulated them on their first child. Please pray for the Lisu in Myanmar as they face many hardships.

God has given us yet another opportunity on the mission field to show His love, and we need your help and continued prayers and partnership. If you feel God calling for you to help out or would like to know more about how to help, please let us know.

Several occasions, Isaac has demonstrated his compassion and general kindness to others. A week ago, the school chose him to be Aladdin for the play. He voluntarily chose to be Jafar in order to comfort one of his classmates who cried heavily in the school for wanting to be Aladdin. Great job, Isaac! Becky is doing a great job on tutoring Isaac. She has to force herself in studying Japanese and revisiting her Chinese in order to catch up with Isaac. She is uplifting her parent’s loads (while Stephen is frequently out for mission trips and Mary is exhausted from managing the house and farming). They both are enjoying evening time together. The whole family celebrated Mary’s birthday on January 29. Everyone was happy to see mum’s happiness and laugh as we had dinner together.


On the same day, Stephen and Mary’s visas was finally been approved. They are now searching for their flight to the States. They are hoping to depart on March, after Isaac begins his summer break so Isaac could join the trip. He is very excited about this trip because he gets to go see the place of which he was born. Your prayers for the whole family is much appreciated!
Posted by stephen at 6:49 PM