We apologize for the late update because Stephen has been in Myanmar and China for a little over a month. While he was there, some of the time, he wasn’t even able to communicate with his family. After coming home, Stephen had to go to the hospital because he picked up a type of flu from Myanmar; he was in the hospital for almost a week, but praise the Lord he is now home and recovering. Nonetheless, he said that this trip was extremely fruitful!

In early October, Stephen packed up his bag to go and teach the book of Daniel, Revelation, and also eschatology because the Christians in Southwestern China and Northern Myanmar had been requesting for Stephen to teach them for several months. On top of this, Stephen was also planning to visit and encourage the displaced Lisu people in Northern Myanmar. We want to share a little bit about how great God is and how His timing is perfect. Just a day before Stephen was to board a plane to Myanmar, AFC received a generous amount of money to help the displaced in Myanmar. Stephen was able to take that money up to Myanmar to help the people. God is moving through teachings and also through physical help for the Lisu. On this trip, God used Stephen to feed the people both physically and spiritually. Praise our Living God!

Stephen’s first half of the trip was spent in Ying Chang, Mungshi, Teng Chong, South-west of China. He traveled and taught in the cities and remote villages in these regions. At first, he was very nervous because this was the first time that he taught Bible in a “classroom” setting. This time was different because in the past when he was in China, he would either preach at a churches or would attend conferences about culture where he briefly incorporated the Bible, but this time, it was specifically to teach Daniel, Revelation, and eschatology. He taught in the city and after several days would move to another city or to a remote village and continued. God was definitely working because most people accepted his teaching. Throughout his time in China almost every day and night, he taught the Lisu to study from the Bible, not from teachings based on human reasoning which mostly contradict the Bible.

Many of the Lisu that came and studied accepted his the teachings. Some just couldn’t accept the teaching even though they saw what the Scripture said. There is a big need for the Lisu Christian in China to study the Scripture. For example, some of the churches there believed that the wooden cross in front of their church has powers, and if someone were to get sick, they believed that they had to dip the wooden cross into a bowl of water and drink it for healing powers; they were taught this for very long and so, for some of them, it was hard for them to change. God is definitely at work because many of them, after studying with Stephen, are having “AHA” moments, as they start to understand the Bible.

On a different note, Stephen’s ministry through the Lisu Cultural Conferences in China is growing. After teaching the Bible for a couple of weeks, Stephen met with some of the Chinese Lisu government leaders and they would really like Stephen to open a Lisu Cultural Center in Ying Chang. This is a great step because we are getting closer to our target of actually teaching the Bible to non-Christian Lisu in China. The Lisu Cultural Center would be a place to teach the Lisu language which all the Chinese Lisu would like to learn because many Chinese Lisu cannot read or write Lisu and there’s a new law that came out that if one were to claim to be Lisu in China, that person has to be literate in Lisu. As you may know, the only way to learn the Lisu language is through the Bible because the person who created the Lisu written language was an English Missionary a hundred years ago.  Praise God! On top of this, Stephen was actually on Chinese National News and was introduced as a Lisu from Thailand and an expert in the Lisu language. How awesome is our Living God!

After a couple weeks in China, Stephen crossed the border into Norther Myanmar where he also taught Daniel, Revelation, and eschatology. It was a similar situation here. Many people accepted the teaching and understood that they need to study from the Word of God and not through old teachings that may not even be consistent with what the Bible teaches. One of the Lisu, who studied Bible in India, believed that he knew all there is to know about the Bible until he came to Stephen’s class; after the class, he told everyone that he was humbled and at the same time happy to learn more. On the other hand, there was another older man that came to learn but could not accept Stephen’s teaching because it didn’t go along with the teachings that he grew up with; Stephen showed him what the Bible said, and the man saw the texts and knew it was in the Bible but he just couldn’t accept it because he couldn’t imagine disagreeing with what his past teachers taught him as he grew up. Stephen taught the people to that they must study the Word of God, the Scripture, not just trusting in anyone that teaches (he even told them that if what he teaches doesn’t line up with the Bible, they should follow what the Bible teaches). Many people were encouraged and wanted Stephen to make more commentaries so that it would be a study tool for deeper understanding the Bible.

As Matthew 25:34-37 saying “Then the king will say to those at his right hand, ‘Come, you that are blessed by my Father, inherit the kingdom prepared for you from the foundation of the world; for I was hungry and you gave food, I was thirsty and you gave me something to drink, I was a stranger and you welcomed me, I was naked and you gave me clothing, I was sick and you took care of me, I was in prison and you visited me.’…” (NRSV). While Stephen was in Myanmar, he also had the opportunity to visit and use the donations that came in to help encourage the displaced Lisu people. Many people ask us why we only help the Lisu people when it comes to the displaced people, and we would like everyone to know that other people groups (even the ones involved in the war) have help from outside non-profit organizations and funds from other countries, even from the UN. The Lisu as a whole, undoubtedly the group that’s not involved in the fighting, fell through the cracks of any outside support. We want to spread awareness in a way that is not biased because we only want to help the people in need, without being involved in the politics; because of this, our Missions is one of the very few groups that can go in and actually move and help people freely. With the God given donation he received the day before his trip to Myanmar, Stephen was able to buy rice and necessities for many Lisu (especially the ones that are struggling the most) living in Northern Myanmar. A lot of Lisu children became orphans as a direct result of this ongoing fight. We are praying that God will provide funding and also the right people to help plan an orphanage in Northern Myanmar. One of the last days of the trip, Stephen and his team fed these displaced children. As the children came and ate meat and a healthy portion of veggies and rice, many displaced adults also stood around watching hungrily. So, Stephen and the team felt moved to a deep sadness and compassion, they all pitched in to get more food for the adults as well. 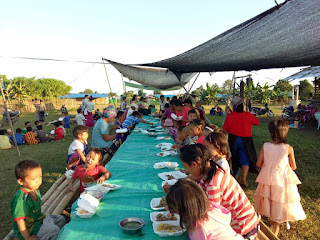 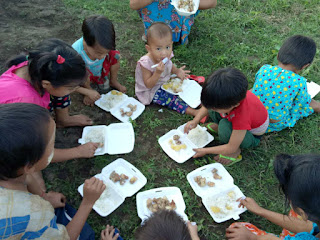 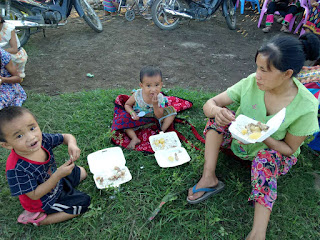 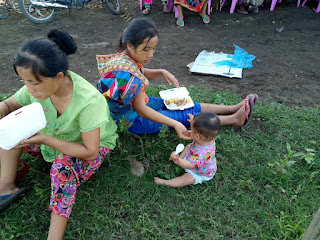 During the trip, Stephen taught every day from morning to late night and so he was extremely exhausted. It has been indeed a tiring but blessed month for our ministry! On the way back, he caught the flu from Myanmar and when he got home, he had to go straight to the hospital for almost a week. Praise God! Stephen is now home, but at the moment currently resting and recovering from the sickness. Besides this, the family is doing well. Mary is getting ready to harvest the rice field. Isaac is doing great at his school. He’s top of his class in Chinese and English. His Japanese and Thai are coming along. He is now able to read the Lisu Bible. Becky is making an English curriculum so that she can better teach English. Nick is currently teaching English part-time and learning more about the refugee situations in Myanmar, preparing to offer an orphanage for those displaced children who lost their loving fathers and mothers due to the ongoing wars and finding connections to help develop the Lisu in Myanmar.
Posted by stephen at 10:30 AM