The Wongs in Focus!

Monsoon season or raining season has begun and schools have started! Summer vacation has come to an end for the Thai people. Now it is time to getting back into their daily work routine. Every family seems to have started busying themselves with works. Sadly, the Wongratanamajcha family has passed the summer without any official summer vacation. As the United States finally started their summer break, Thailand itself has started their schooling. As John finally came back home and started his break, Stephen came back from his mission field and Isaac has begun his school. Though the entire family has been busy in different ways, we keep thanking God for the gift of fellowship as all the family members are finally united. We believe that as missionaries in Southeast Asia, we are compelled to preach the Gospel to people nonstop with/without season as the Bible says “Woe to me if I do not preach the Gospel” (1 Corinthians 9:16).

The family has been well, but very busy. Stephen himself has been working every single day on his 1 Corinthians commentary. He usually wakes up at 5am to start his work and sometimes finishes as late as 6pm. He hopes to complete his commentary within the next two weeks before sending his project into publishing process. 1 Corinthians seems to be significant and relates to the people of Asia. Some subjects that relate with the Asian people are idolatry, spiritual welfare, speaking in tongues, and ancestral worship. Stephen has also taken time to mentor to his former students who are currently serving His Kingdom in Burma and China. Some students have been travelling to very restricted areas in China, offering teaching classes to the local people at the house church context. Whenever there is an issue or something in the Bible they do not understand, they will usually ask Stephen for answers and that is usually done through a messaging application. He sometimes even preached sermons and taught via this device to various group church leaders throughout Northern Myanmar and China. Due to his age, rather than going to very remote areas for evangelism, we are encouraging him to spend more time in the Christian literature ministry.  So far, he is very energetic and enjoys serving the Lord both in the field and in the office. Please lift him up in your prayers so that many people will be blessed and many souls will be saved through his ministry!

Nick has recently been contacting local churches in Thailand in order to come up with a team to establish some sort of plan to start raising money through fundraisers and eventually online donations. His first fundraising event is held at the Lanna Expo, a northern Thailand conference to exhibit local northern Thai products. At this event, Nick has been blessed with a free booth in order for people to wear Lisu clothes and donate money towards helping the Lisu refugees in Myanmar. There are still a lot more to be done, please pray that God provides us with the energy, wisdom, people, and funds to be able to help the Lisu (both Christians and non-Christians) in Myanmar so that Christ’s name will be glorified! Please also continue to pray for the Lisu because we have recently heard that the fighting has been broken out in Danai, Kachin state. The result of this fighting ten of ten thousand Lisu are stranded between the intense battles that surrounds them and many lives have been killed through the collateral damage. 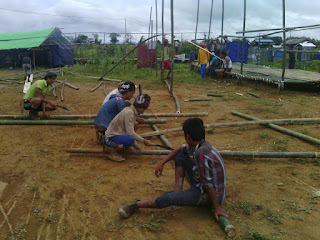 Mary has been busy sending Isaac to and from school, taking care of the house, preparing for the new crops to be planted. What a blessing she is in the mission field. Without her, things would never be possible! She is really key person at our family and ministry who is due to honor go.  Becky has been working hard on tutoring Isaac with his schooling. She also has been taking the time to learn Spanish as well as relearning her French. John has had a very remarkable time during his summer break. Most Sundays, John and Stephen would preach at local churches in the mountains. He says he’s learned so many new methods of preaching, the usage of preaching through stories to the audience. This seems to be the most effective method of preaching as it captivates and helps the audience relate with the speaker. Overall, the Wongratanamajcha family has been very busy, but thankful that they are all together and working for God.