The highlight of our mission works in the past month of February was the conference on Christianity and culture for the Lisu Christian leaders.  The conference turned out to be the dialogue between Christians and non-Christians and among Christian brotherhood with various theological and even denominational background.  Our mission team spent most of our time in preparing, inviting both Christian and non-Christian leaders, and taking care of them during and after the conference.  The conference was set on February 25-29.  However, because of the international traveling flights many of them arrived early and most of them departed on March 3rd.  The reflection of the conference has turned out to be very positive.  Many requests have arisen for us to offer more conference like this in the near future.

The conference was phenomenal! The Lisu people from China, Myanmar, and Thailand joined together in order to learn about the origins of the Lisu. This was then used to help unite the people from different religious backgrounds, striving to bring peace within the nation.  The Lisu people have tried to obtain unity through many practices, but in the end, Christianity brings the clearest solution. Through Christ, the people can join and become one in the flesh! Because of this conference, I can see many people reverting from their ancestral practices and converting to Christianity!

Because the topic “Christianity and Lisu culture,” we could invite both believers and non-believers to have a dialogue together.  Of course, those non-believers could hear the Gospel of Jesus redemption through powerful speakers like Jim Johnson (a former professer of Ozark Christian College), Joe Snyder (a church elder) and hearing various native evangelists and foreign missionaries at several devotional sessions.  What’s better than this opporturnity to share our faith to the lost souls? 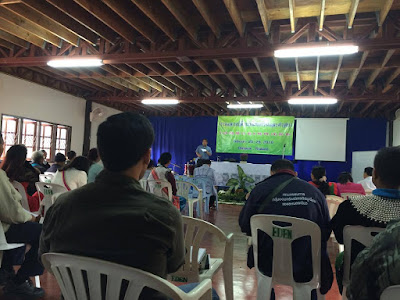 Praise the Lord! God was moving at the conference.  A couple of the non-believers came to Mary and told her that they would accept Jesus and be baptized after returning to their homeland in China.  Two key leaders from Shangri-La came to one of the Chinese Christian pastors asking for prayer before flying back to China on March 3. One of the Chinese leaders called Mary after returning to Kunming expressing with a crying voice that she had seen a true model of God’s servant through Mary’s servanthood by showing hospitality to the people attending the conference.  Many Christian leaders from Myanmar expressed their gratitude to Stephen again and again because they had experienced the barriers between Christian denominations had been torn down during the conference.  They even requested Stephen to offer such a conference on the Myanmar side in the near future.

Some of the issue at the conference might be nonsense to other people groups, for instance, Christians and dancing, Christians and sword climbing, but it did touch the hearts of many Lisu leaders, both Christians and non-Christians.  Dancing could be compared to the gun issue in the USA.  It may be considered stupidity from other country’s perspective whether to be for or against on guns.  The issue of dancing has been an enormous issue for blocking many Lisu for acceptance Jesus Christ.  On the other hand, the sword climbing has become one of the key activities to lead Christians away from worshipping solely the True and Living God. This conference helped leaders understand which traditions are merely culture that should be preserved and which traditions relate with the worshipping of evil spirits that need to be abolished. 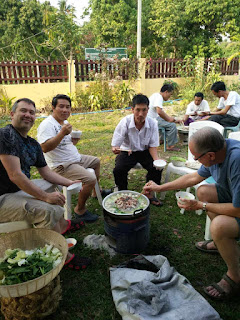 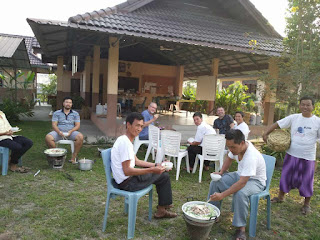 One of the greatest things about this conference was that the every one of the Wongratanamajchas took part one way or another to help with this conference. Stephen organized the conference. Mary took care of the hospitality and food aspect of the conference. Nick drove people to and from the conference. Becky fellowshipped with many of the women leaders that attended. Isaac entertained the leaders with his charm. John attended the events when he wasn’t at school. The whole family enjoyed having all the guests.

Please lift up in your prayers:
1.       Stephen is headed to Myanmar on March 9th to teach at two different bible training centers and to evangelize with his students and to help patients struggling with malaria and tuberculosis.
2.       The family during Stephen’s absence
3.       The people that want to accept Jesus Christ after this past conference