No Turkey, But Pork!

We are always happy when Thanksgiving approaches because this festive occasion gives us the opportunity to appreciate and express our gratitude publicly, first to our Living God and Lord for his faithfulness in providing every aspect of the family and ministry needs.  We also want to express our gratitude to you for your continual prayers and supports.

Here in Thailand, we don’t have a national day of “Thanksgiving,” however for Christians here, it is church oriented, rather than family oriented.  Every church would hold Thanksgiving on their own chosen date.  Mostly, the date will be set on Saturday so that they will be able to invite neighboring churches around to attend it.  Of course, no turkey, no sweet potatoes, no pie on the Thanksgiving table.  Wow! We are missing them, particularly Stephen’s favorite, Apple pie with ice-cream on top.  Thanksgiving, celebrated by the many churches here, focuses on God as the source of all blessings.  Church members would bring fresh crops from their farms: mainly rice, corn, peanuts, pumpkins; and all kinds of seasonal fruits along with the livestock such as pigs and chicken.

Almost every Saturday, Nick drives Stephen to churches at various villages in order to preach for “Thanksgiving.” Like traveling preachers, we have been invited to preach to many different churches.  Since we are preaching only the Gospel of Jesus Christ and making ourselves available to any churches or denominations, we have been invited to preach at various churches.  It seems that our preaching schedule is filled up all the way to Christmas.  Often, the message is likely the same but with different illustrations.  At almost every church, Stephen has demonstrated a small plastic bag filled pieces of dollar bills on his office desk. None of us know whether it was a real or not, but it has a great meaning to us. It always reminds us that money is nothing, life is empty because we were born with nothing and we would not be able to take anything with us once our time is up on earth.

The most recent unique Thanksgiving celebration was held at Ban Lisu Hui Chakan.  This Lisu village is on the royal project.  They have been moved out of the national forest and into a  new place to settle down with 5-10 acres of field for each family, which the Thai government has graciously offered to them. This is a common size of land for ordinary farmers in Thailand.  Out of 75 in this village, 65 households are believers. The Thanksgiving at this village was filled with various ethnic groups of neighboring tribes: Lahu and Akha, soldiers, and the government workers.  At this unique service, Stephen preached in the “Lanna” dialect of Thai language so that all ethnic groups could understand without translating between languages.  The “Lanna” dialect is the common language of the Northern province of Chiangmai.  Stephen has not spoken this dialect in more than 30 years, but praise God, it was still working! 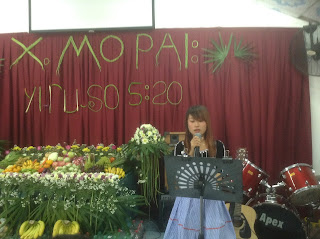 A typical layout of new crops for Thanksgiving 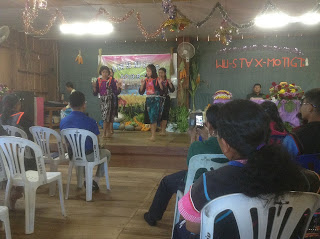 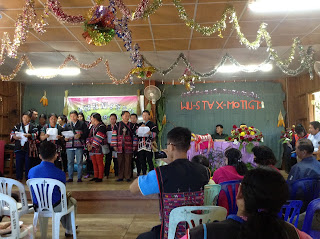 A group of Akha singing a choir 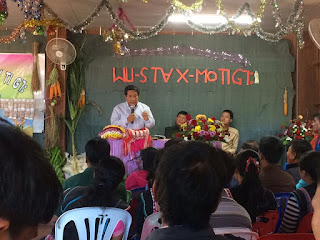 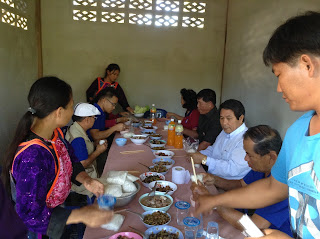 No Turkey but pork!

In the area of culture, problems arise and causes much conflict between leaders and members, between believers and nonbelievers, because of the lack of understanding of the traditional Lisu culture.  Many of the Lisu churches in Thailand have lost their members to the world because of the different opinions on the cultural issue.  Many Christian leaders in Myanmar have revitalized the traditional cultures without knowing that they may lead their members astray from worshipping God alone by unknowingly going back to the former type of worship.  The traditional cultures have created conflicts between believers and nonbelievers in China for several decades.  Among church leaders, there are mainly two groups. The first group is standing against any type of the Lisu culture while the second group is promoting the culture.  The problem is that both groups have a limited amount of knowledge on the background of the Lisu culture.  They don’t know how to handle the cultural issue properly. With cultural ignorance, both groups are struggling in leading their members and are in danger of church division and even leading the people back into old practices.  As you have known that we offered several cultural conferences for nonbelieving leaders among the Lisu.  After hearing many requests, we will offer the International Christian Leaders Conference to all Lisu Christian leaders.  Since this will be the first conference of its kind, we would like to ask you to pray for this conference so that God’s Will be done and His Kingdom will be expanded throughout Southeast Asia and China.  If God is leading you, you are warmly welcome to give a special gift for the needs at this conference.

Update on the Family:

Mary’s rice field is still not ripe yet. She has tried to grow purple jasmine rice or “rice-berry.”  The rice-berry is a hybrid between jasmine and a type of purple rice.  The hybrid has been successful in the past two-three years.  Of course, the price is double the jasmine rice.  None of the surrounding areas have this type of rice. We are beyond blessed to know where to get the seeds.  Probably on this upcoming weekend, it will be ready for harvest.

Every one of the Wongs is doing great.  Becky, John, and Isaac have minor health problems with the temperature dropping.  John is preparing for his ACT test on this coming December 12.  He has also, recently, went to Sadie’s dance and had a great time. Isaac is excited for his coming birthday on December 11th.

Stephen’s commentary on the book of Revelation is at the stage of spell checking.  Making it readable to every Lisu Christian by inviting several Lisu from different dialect groups to go through the commentary.  Hopefully, by the end of January 2016, all the process will be completed.

Thank you very much for your faithfulness in lifting up our family in your prayers and financially supporting our family and ministry in Southeast Asia and Christ.  May our Living God and Lord bless you all.

In His Services,
Stephen and Mary