Since 2012, God has opened a wide door for me to do more ministries inside Myanmar. These ministries include a leadership conference, training Biblical students, evangelism, and youth ministry, extending from the border between Thailand and Myanmar, Shan State, up to the North of Myanmar, Kachin State.  I traveled with students of AIS via airplane, boat, motorcycle and on foot.  It has been a real challenging ministry. 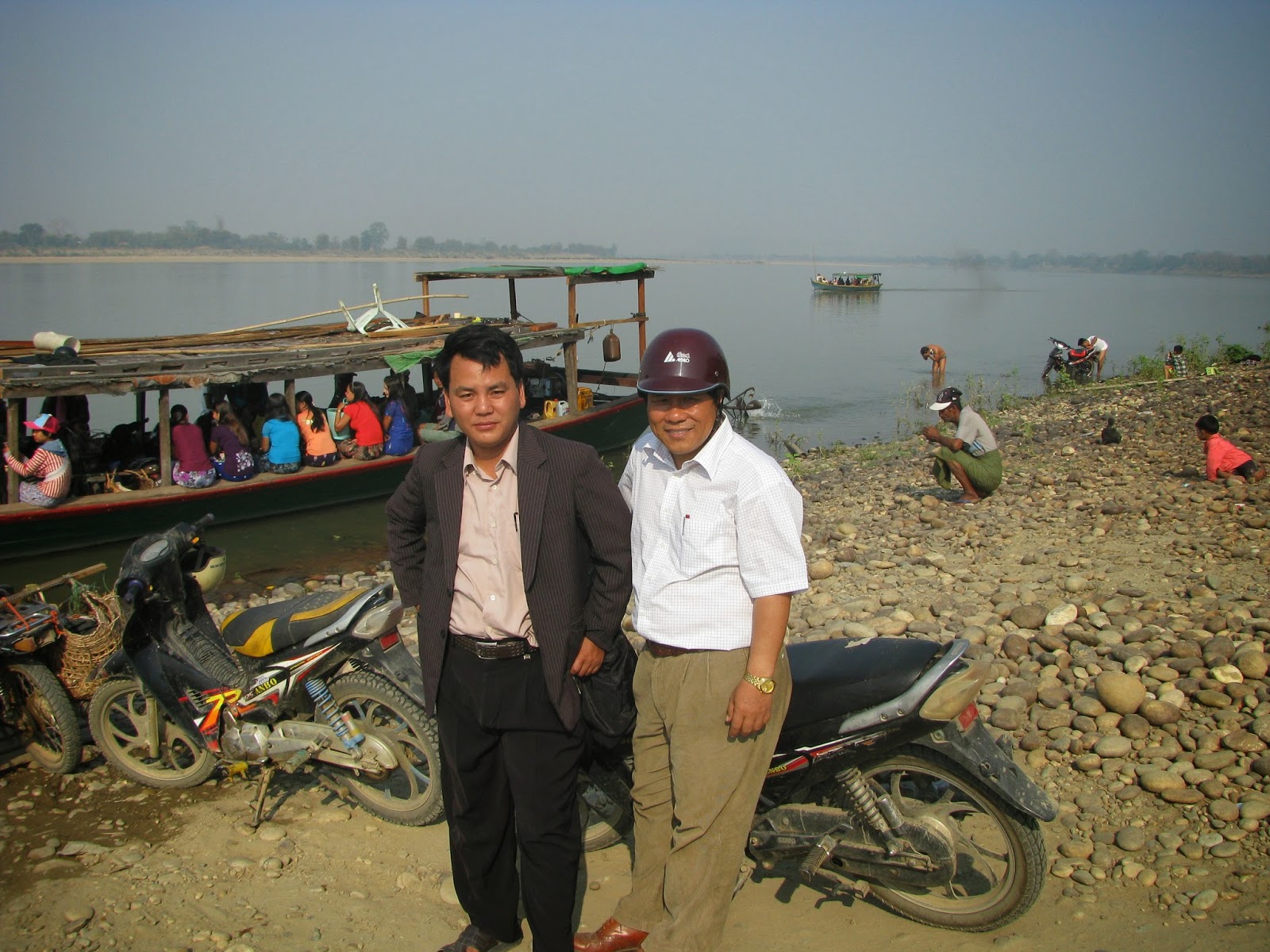 Approximately 200,000 Lisu people live as archipelago of village within the city of Myitkyina, the capital of Kachin state, North of Myanmar.  Generally speaking, the living standard of people in Kachin State is very low.  Basic human needs not only food, water, clothing, shelter, but also sanitation, education, and healthcare are scarce; no clean water, unreliable electricity, low maintenance roads and transportations, full of dirt and dust, even in the downtown area of the capital city.  Roads in many places are under construction with hands.  Merely 10 miles out of downtown area, the villages have no water systems and no electricity.  People have to drill their own water and generate their own electricity.  The sanitation and healthcare are underprivileged.  Many people suffer or even die because of malaria or TB.  Praise the Lord! During this mission trip, through the help of IDES, a well was drilled and through the generosity of Lincoln Christian Church the water system is continuing to build at this moment for an orphanage and for the Bible training center at Lashio; furthermore, over 300 mosquito nets were distributed.   More medical help from IDES will reach them in the next few weeks. 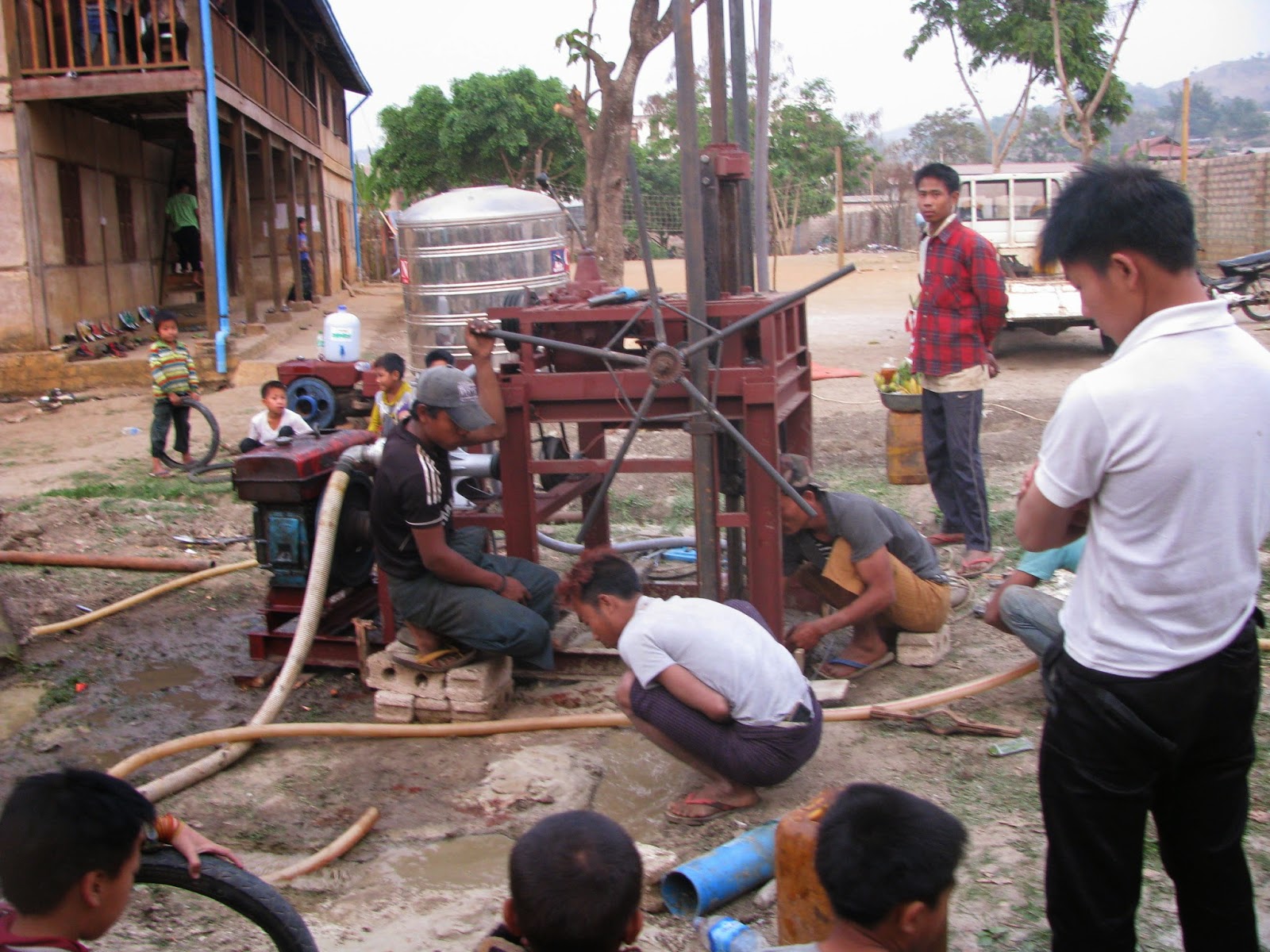 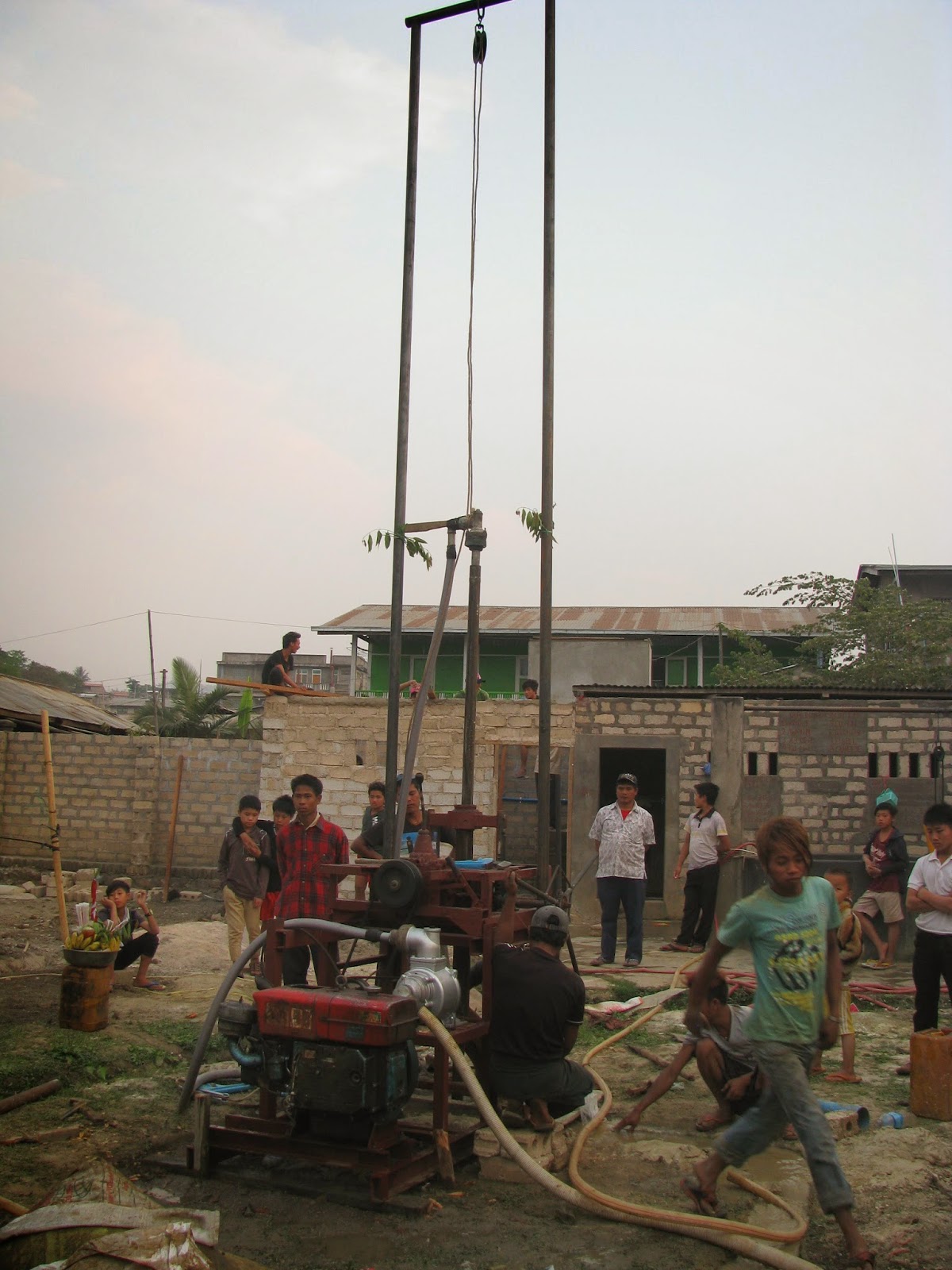 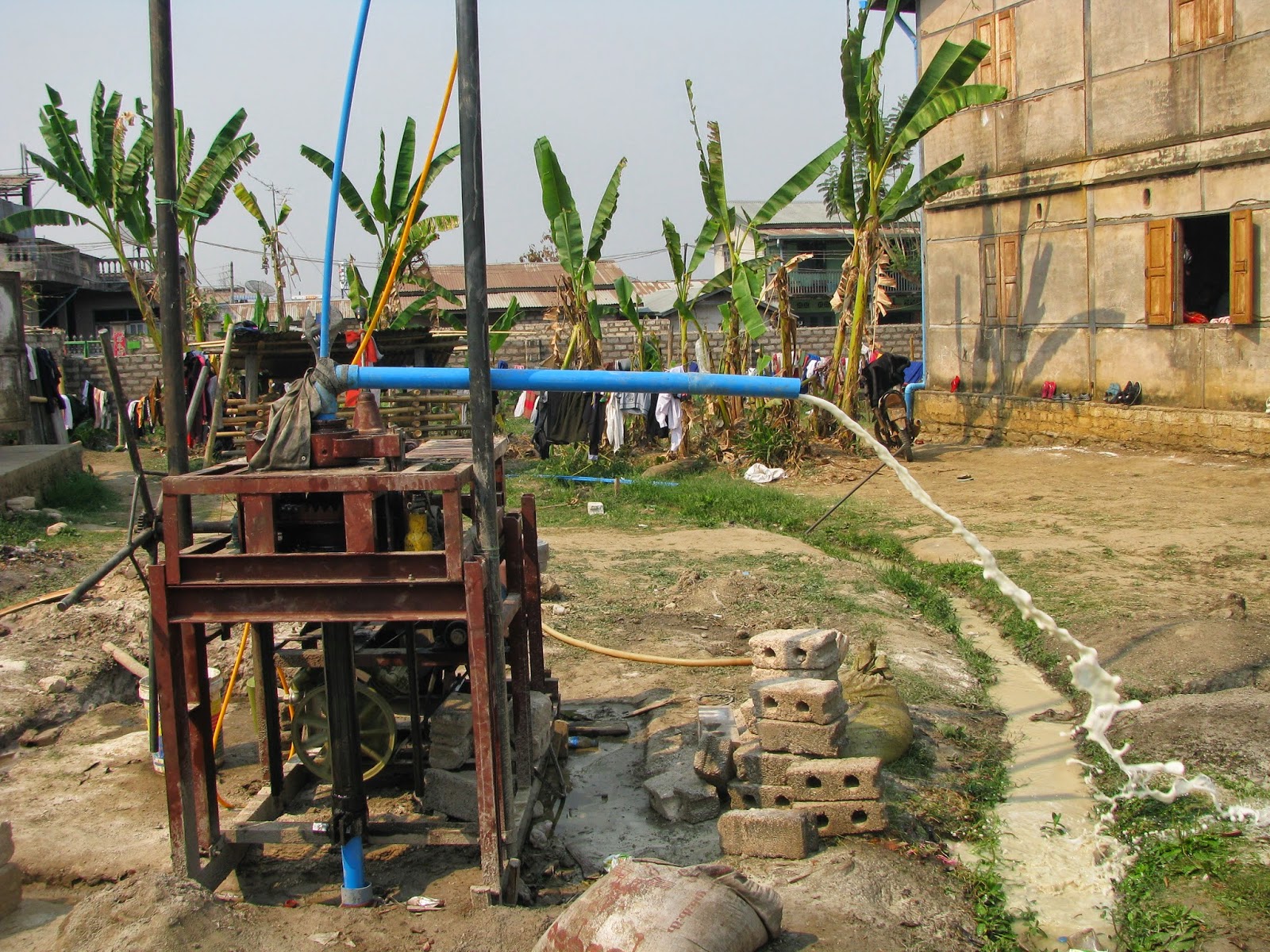 We have found water! 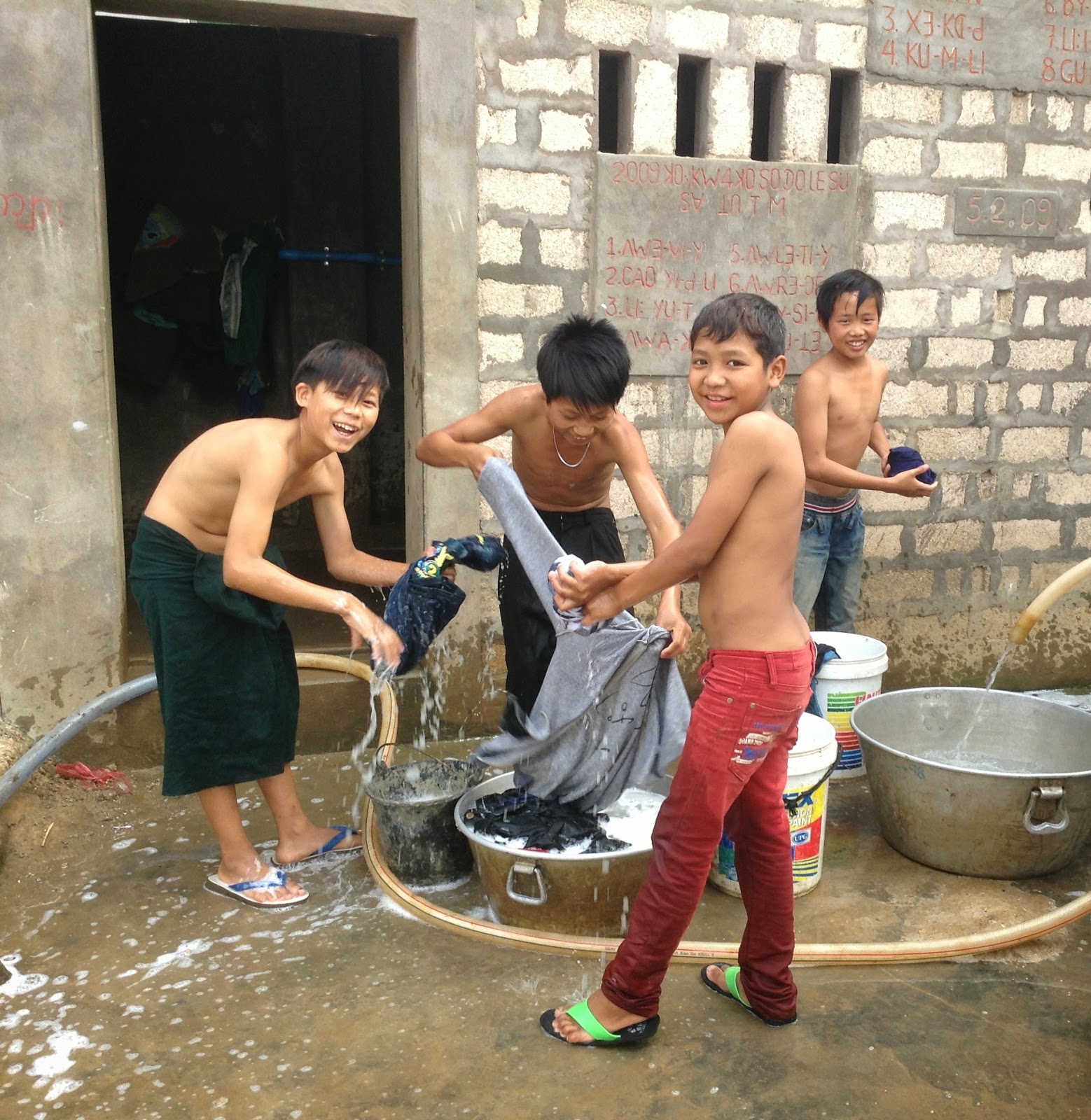 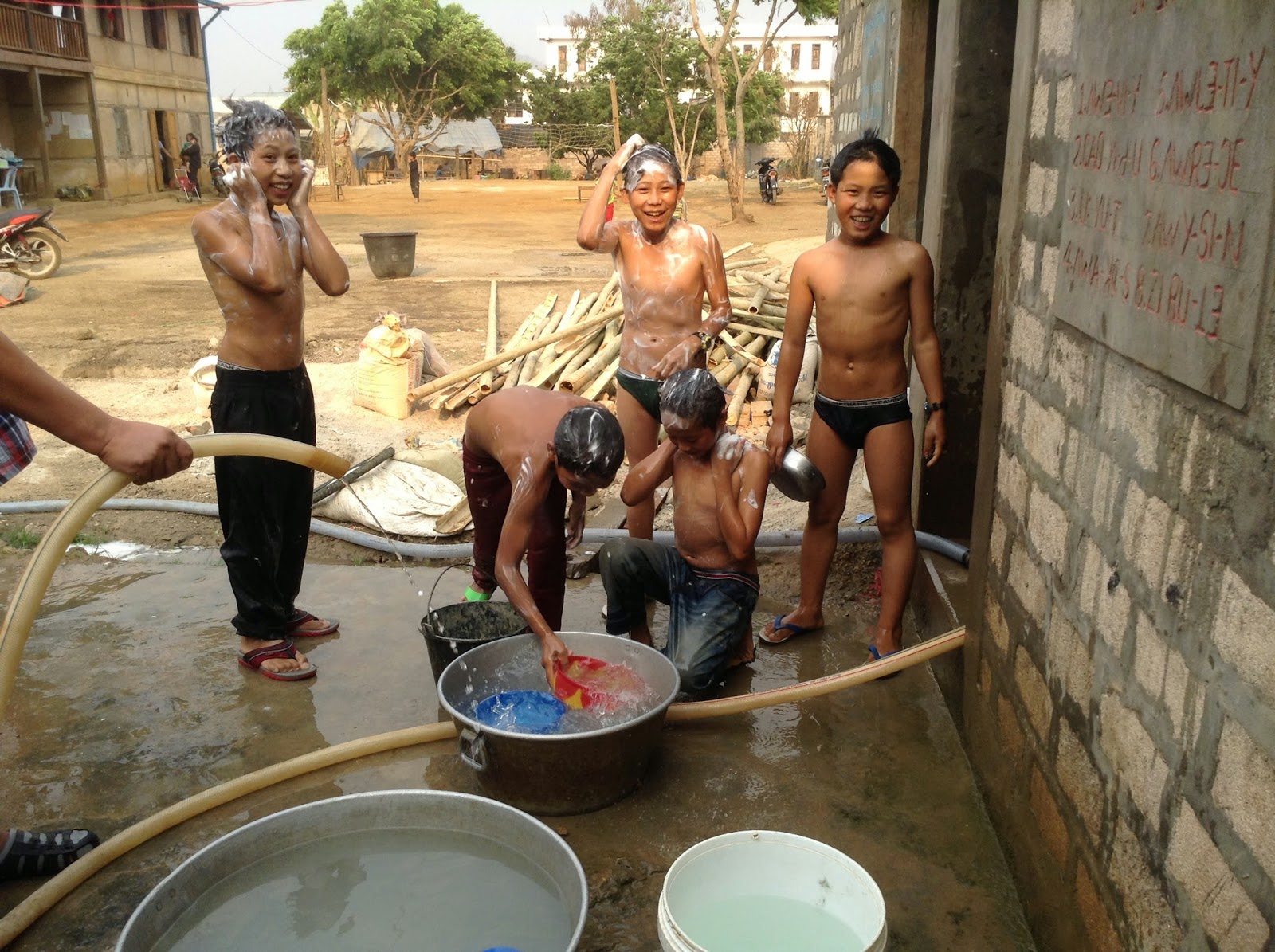 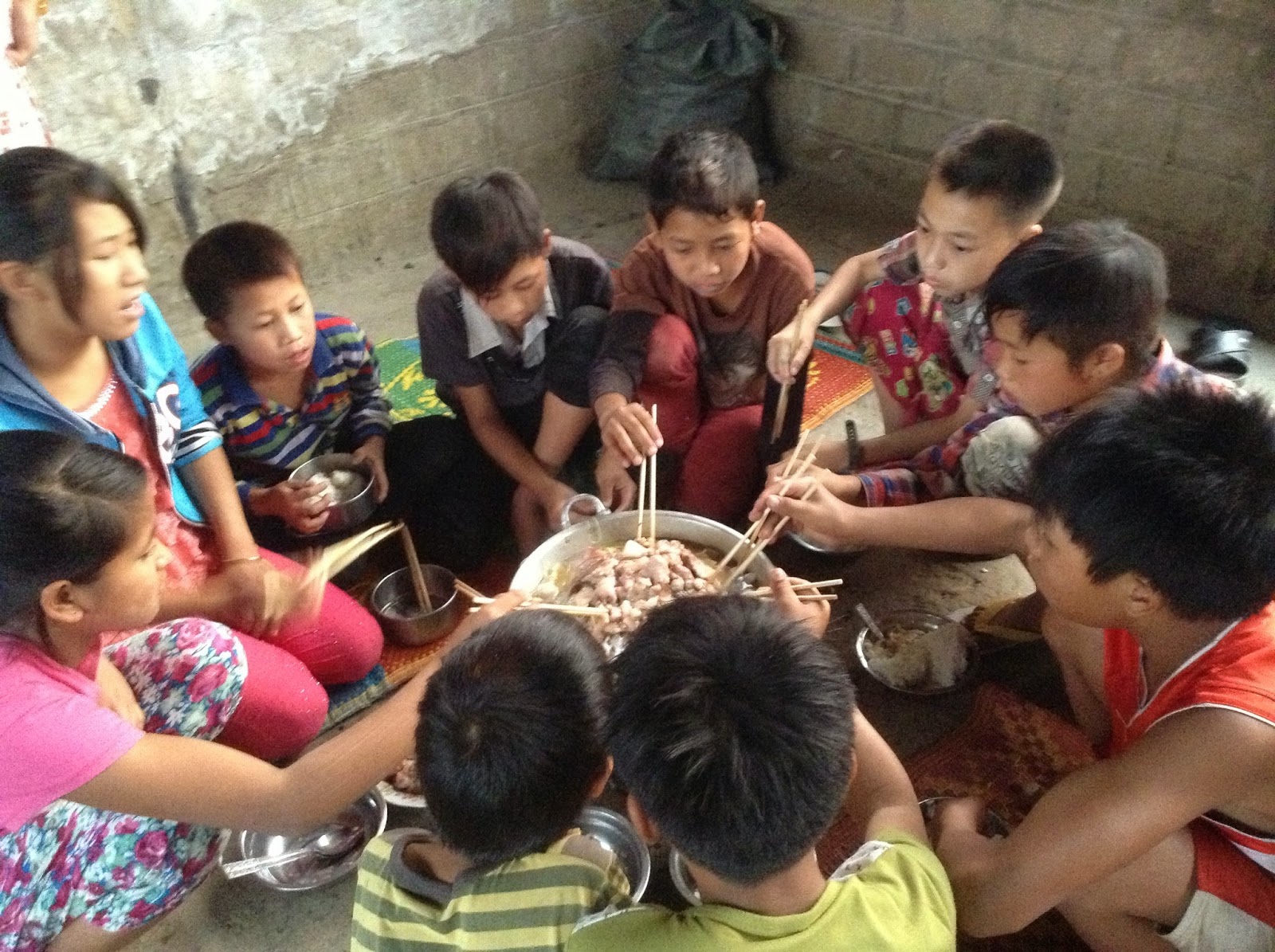 Stephen gave a special treat for the kids at the orphanage with a Korean BBQ.
This was the first time in their lives.

Commonly, each family has 12-13 children but only half of them or a third of them have survived.  Moreover, many children have lost their parents at their young ages.  For example, at the youth camp, I met a 15 year old teenage girl, Nomanee, who just recently lost both parent.  She has just finished 10th grade and came back to her village during the break, and had no home to live.  She is moving from house to house each night waiting for her university to be opened in hopes that she will have a shelter at her campus dormitory.  I asked her why she didn’t go to the orphanage, and she replied that she was disqualified due to her age. If you feel called to help several of these orphans in Myanmar by donating 40 dollars a month, please feel free to contact our mission agency or me directly for more information. 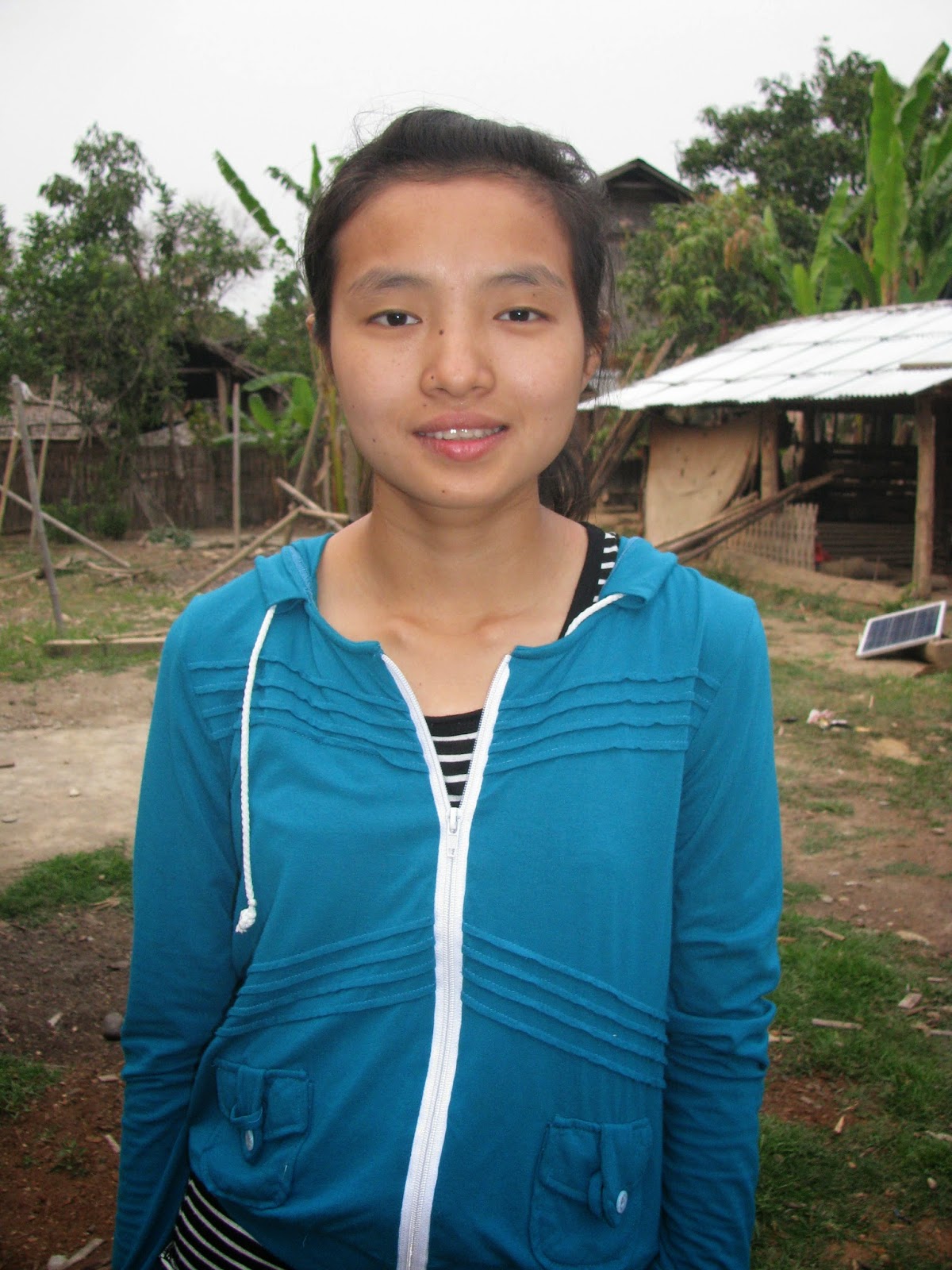 Lisu people in North Myanmar loved to hear God’s Word and they have a heart of giving.  Having very limited means, their spirits of hospitality is par excellence.  Sleeping on a floor for a month my back and all parts of my body was sore, but with their brotherly love and friendly smile it all disappeared at once every time I met them.  Unlike many churches and places, every church service was full with attendants, even early morning 6 AM service; people including teenagers are packed at the church.  They love to hear God’s message, particularly the message of the cross and God’s love.  Every time when I delivered the message of the Prodigal Son and the parable of the sheep and goats, I saw many of the audience filled with tears of joy.  They are truly hungry for God’s Word!  In the past I usually thought the people at the central Myanmar were the hungriest for God’s Word but the fact is that the people in the North of Myanmar zeal for God’s Word hundred times more.   There was a place that requested me to preach for them on one evening.  They came to my place waiting for my answer from afternoon 4 PM to 10 PM and coming back again in the following day starting from early in the morning 5Am to 9Am.  I was so tired and exhausted, lack of a good night sleep due to the floor with no mattress.  My body was so sore.  Indeed, I didn’t sleep well for a week at the youth camp.  I was scheduled to preach for three sessions per day.  Actually, I wanted to reject the request, but at the moment I remembered the story of the consistent widow and telling myself that if I reject the request I might reject God’s will so I went to their congregation.  I was so embarrassed because I was asleep in front of 300 audiences while waiting to preach, however; they gave me time to have a nap for 10 minutes before preaching God’s Word.  Indeed, God is truly working among them, for only less than 5 percent of Lisu people in Myitkyina are unbelievers.  Most of these unbelievers live in the very remote village on the mountain range between the border of Myanmar and China.  If God is willing in the future, we will make an evangelistic trip to this area and win them with the message of God’s Love which HE demonstrated on the Cross. 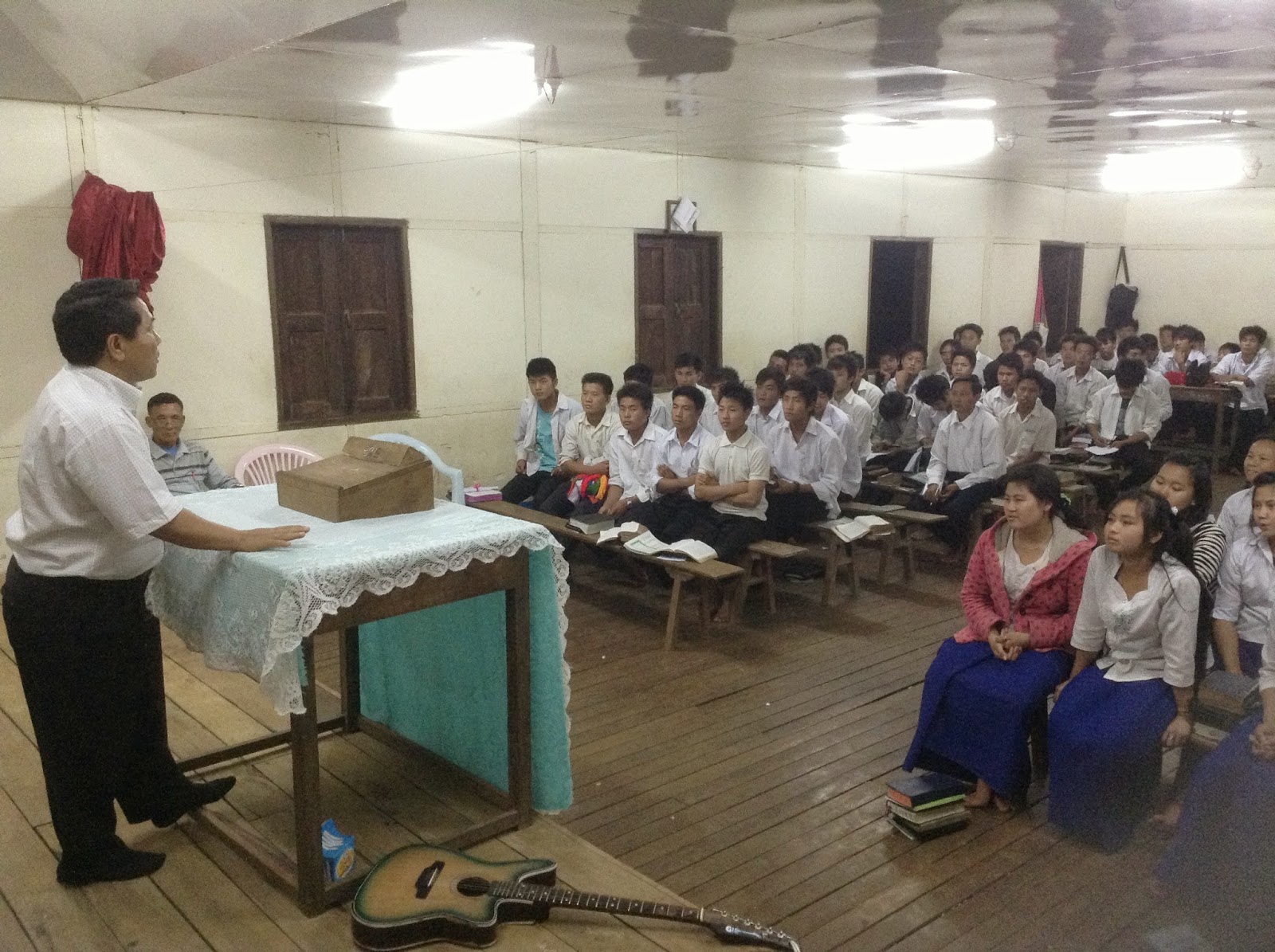 Preaching to Bible students at Lashio 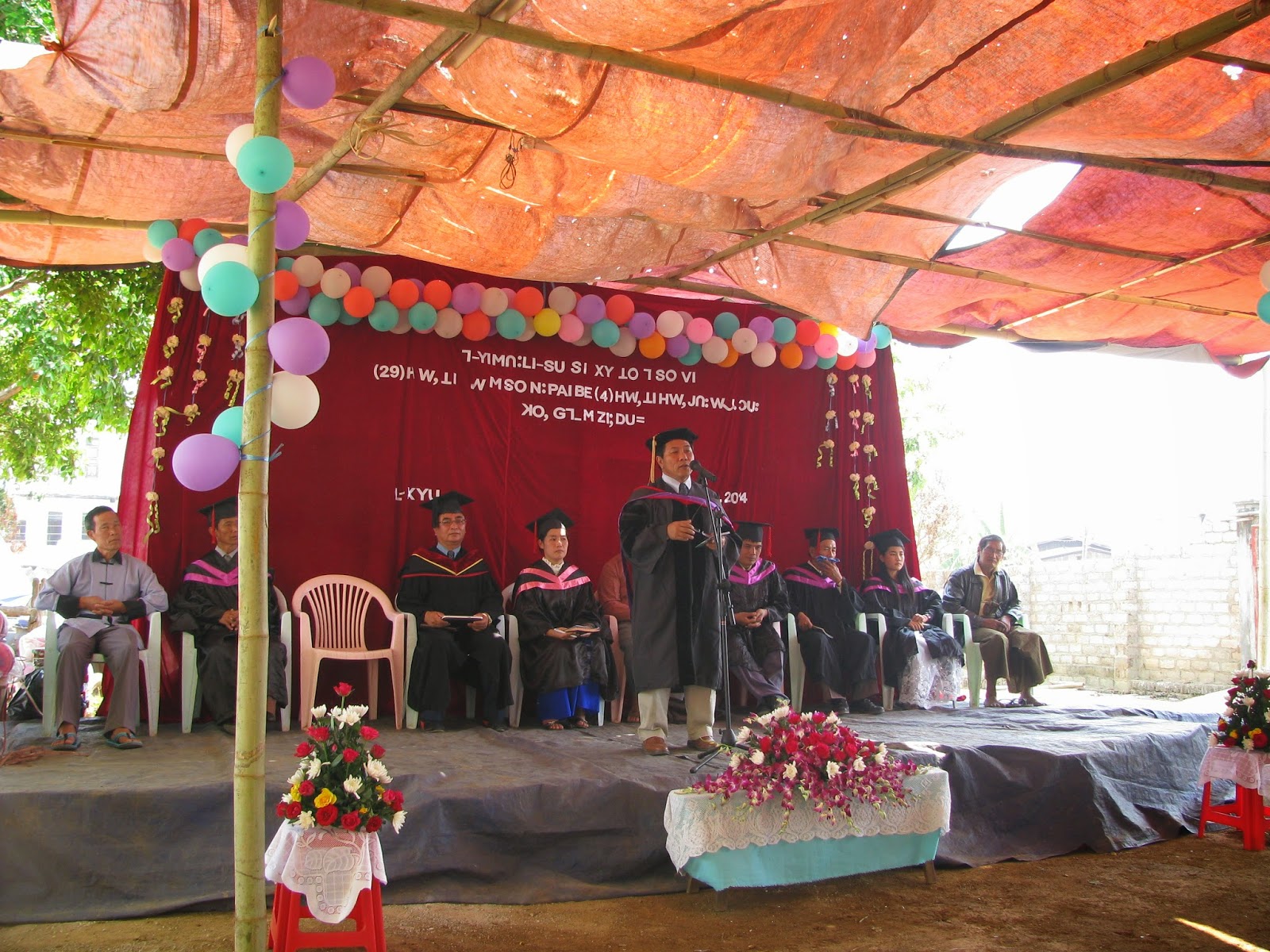 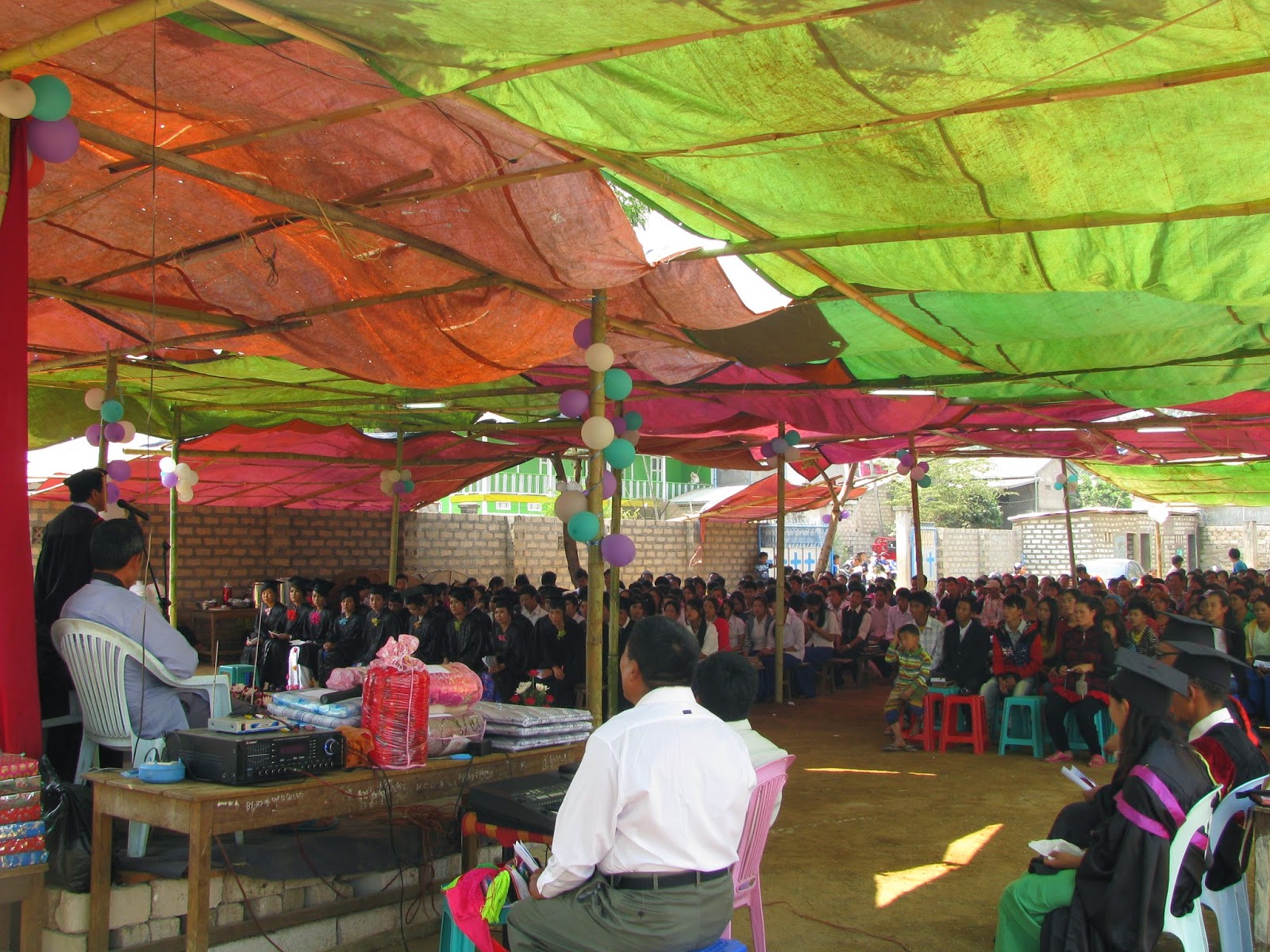 Actually, I went to the youth camp at Lashio and Myitkyina on behalf of Nick.  Nick and the students of AIS had set camp since last year.  Nick could not attend the camps due to the fact that he was unable to renew his passport because of the Bangkok shutdown.  In Myitkyina alone, there were two major camps; senior and junior camp.  There were 300 attendants at the senior camp and 500 at the junior camp.  I chose to go with the senior camp.  I perhaps made a mistake to join the senior camp.  Like most of Americans, they are very active and hardly go to bed.  Therefore, a man at my age, it is very difficult to catch up with their energy.  They kept asking me to preach, to teach, to sing in English for they love to hear God’s Word, which is why I am very proud of them, but singing is not my specialty.  Unlike Americans, they didn’t like to play physical activity games as much as they should.  Worst of all was my Lisu language, which is very different from theirs.  Some of my language turned out to be rude words or laughing stock for them, for instance, a word “mouth” in my Lisu, we say “Nahu” turned out to be a dirty word for them.  They would rather say “muenue,” which is in my Lisu word, it means “tongue.”  After all, they kept asking me to give them a promise that I will go back with Nick as the due time. 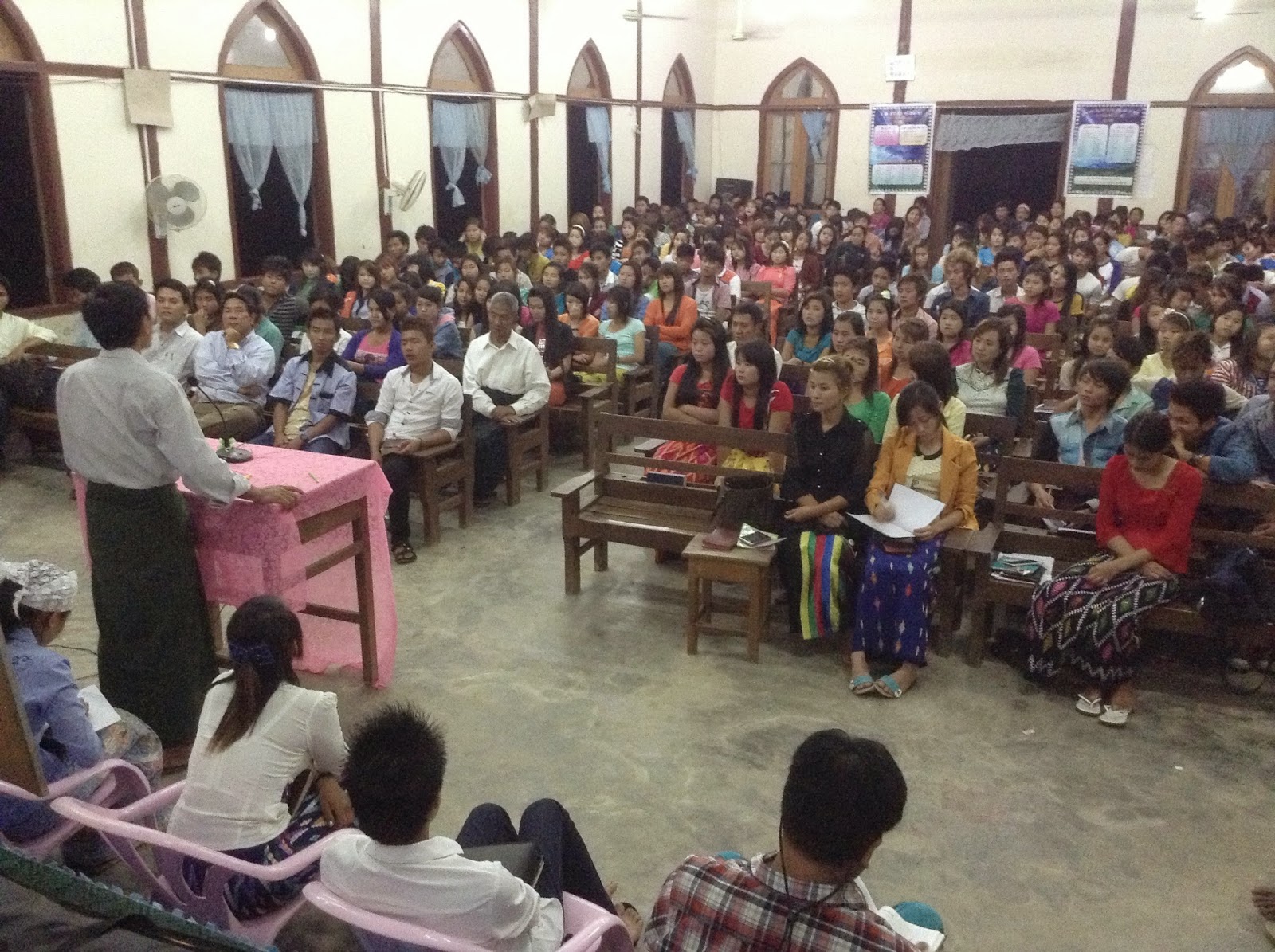 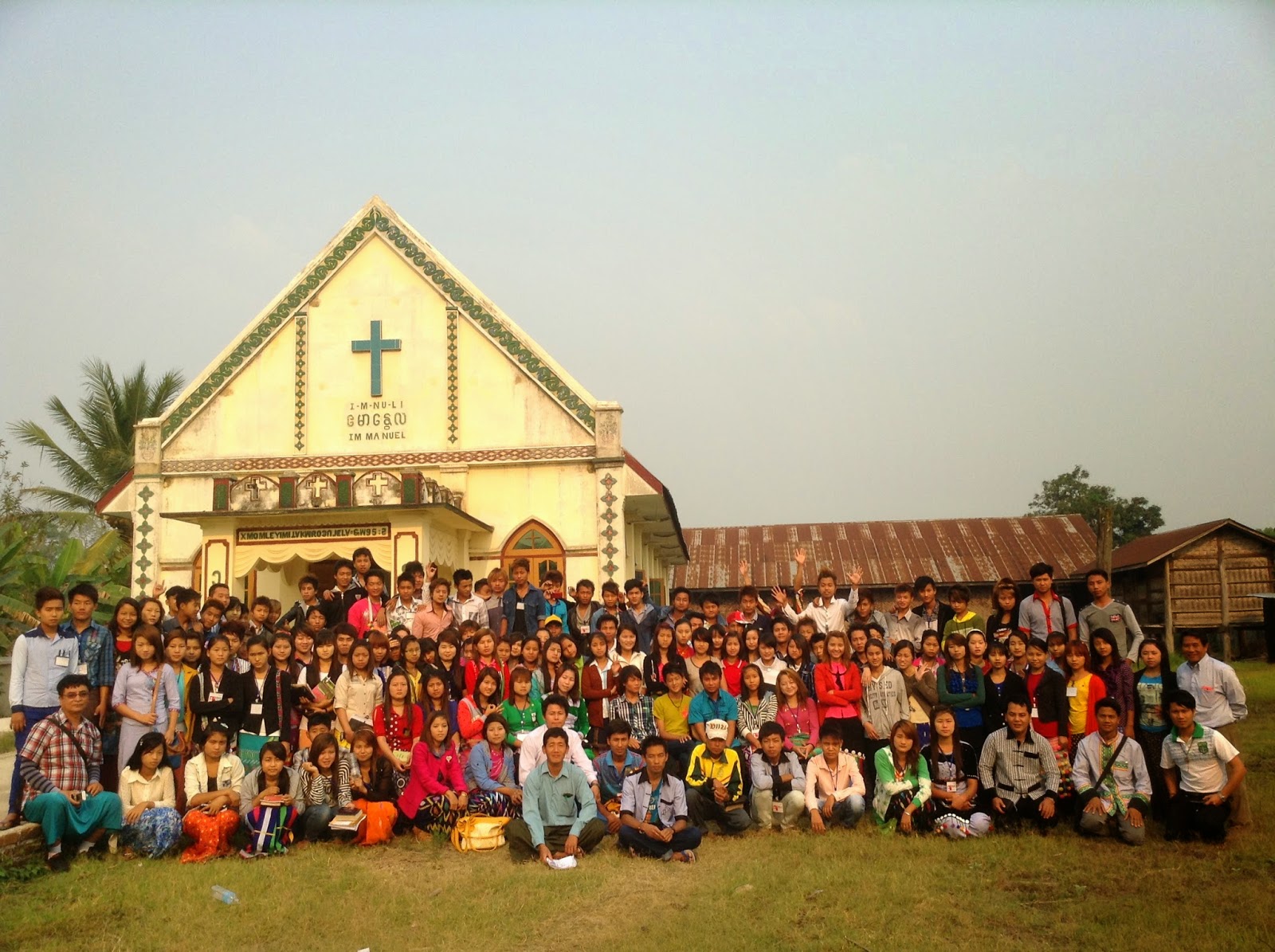 A senior youth camp at Mitkhyina


Truly, there is a hopeful future in the ministerial side.  However, the political side, particularly, the tension of racism is the cause of frustrations.  It really hurts me most and even broke my heart.  The hatreds between different tribal groups cause many violation, even leads to ethnic cleansing in many areas.  For instance, at one area, namely Tasang, about on west side of Lashio, where the Palong, the dominant tribal people of the area slaughtered dozens of Lisu people who are the minority and have lived in the area for several generations.  They annihilated the Lisu people from the area.  The massacre displaced many Lisu from their homes and farm lands.  The saddest part is that these Lisu people are Christians. 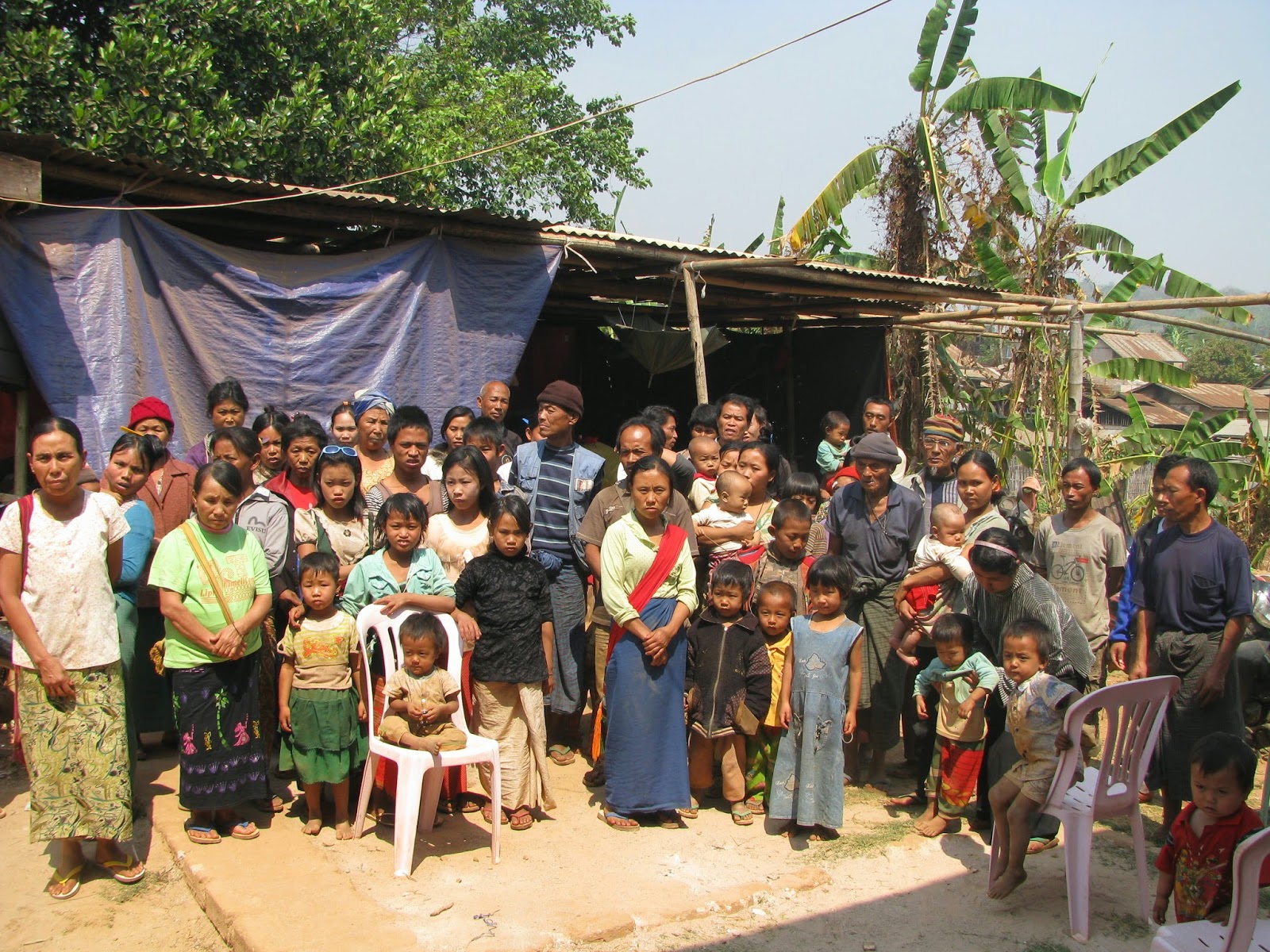 The displaced Lisu who fled from the ethnic cleansing 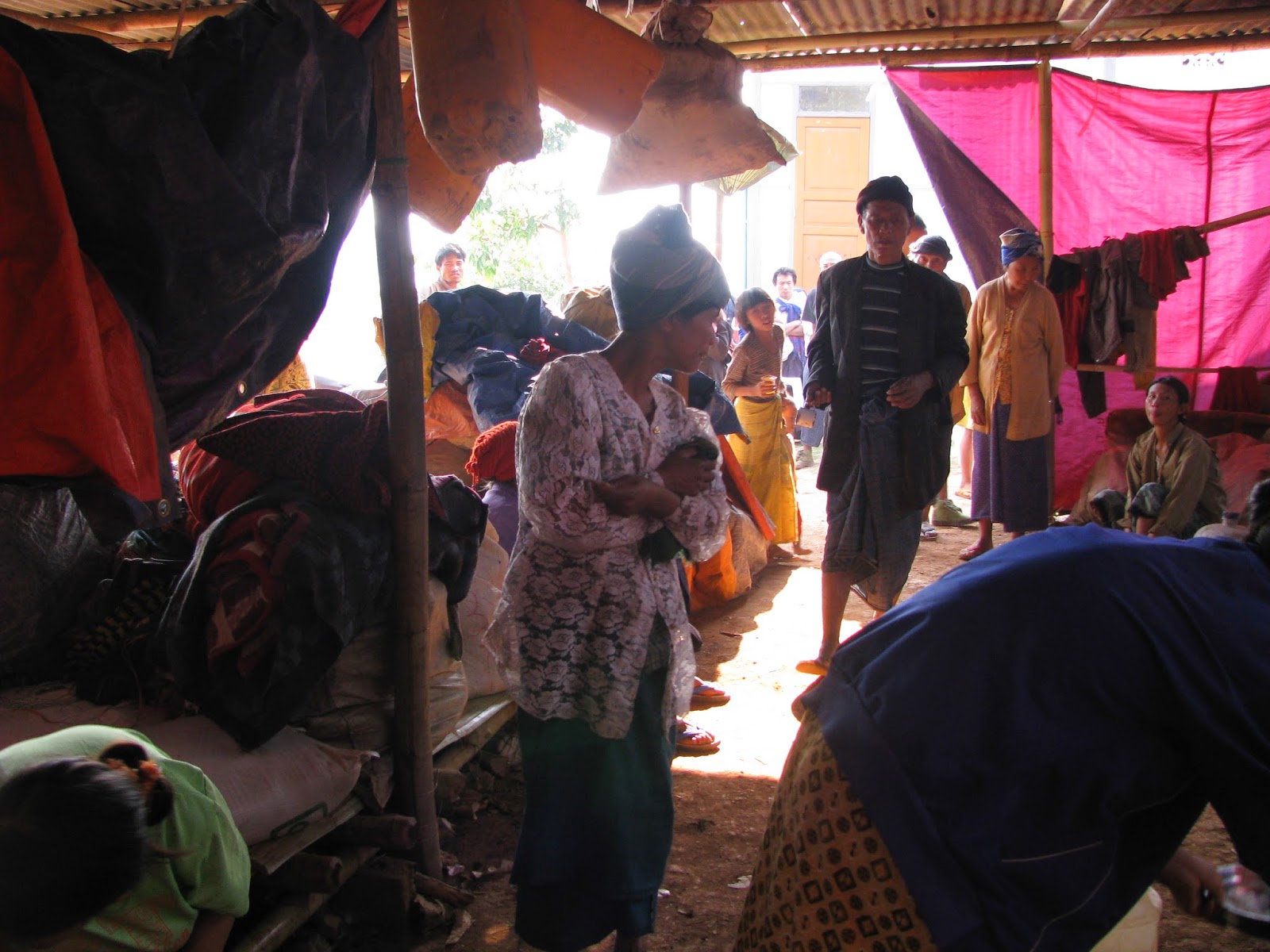 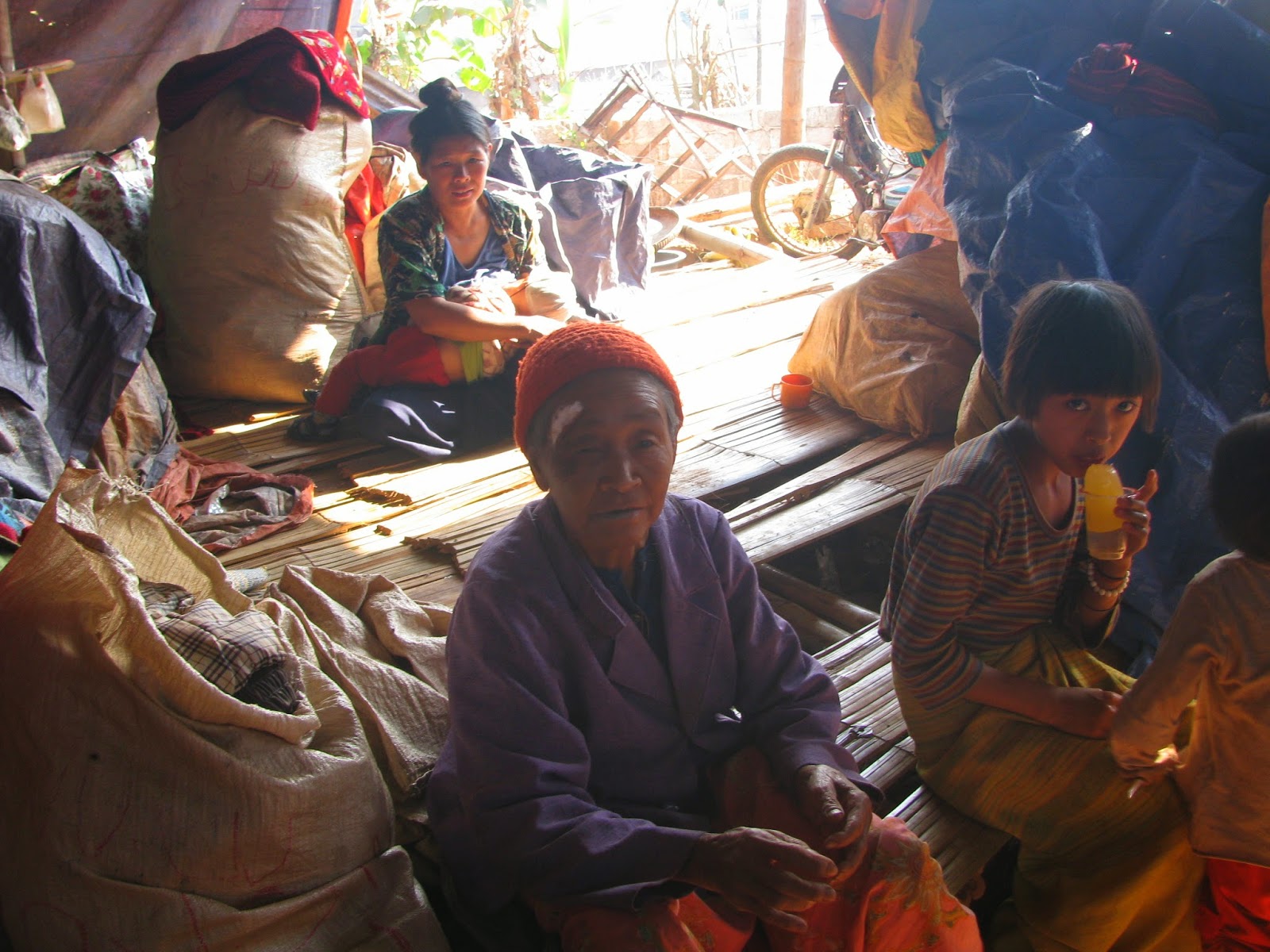 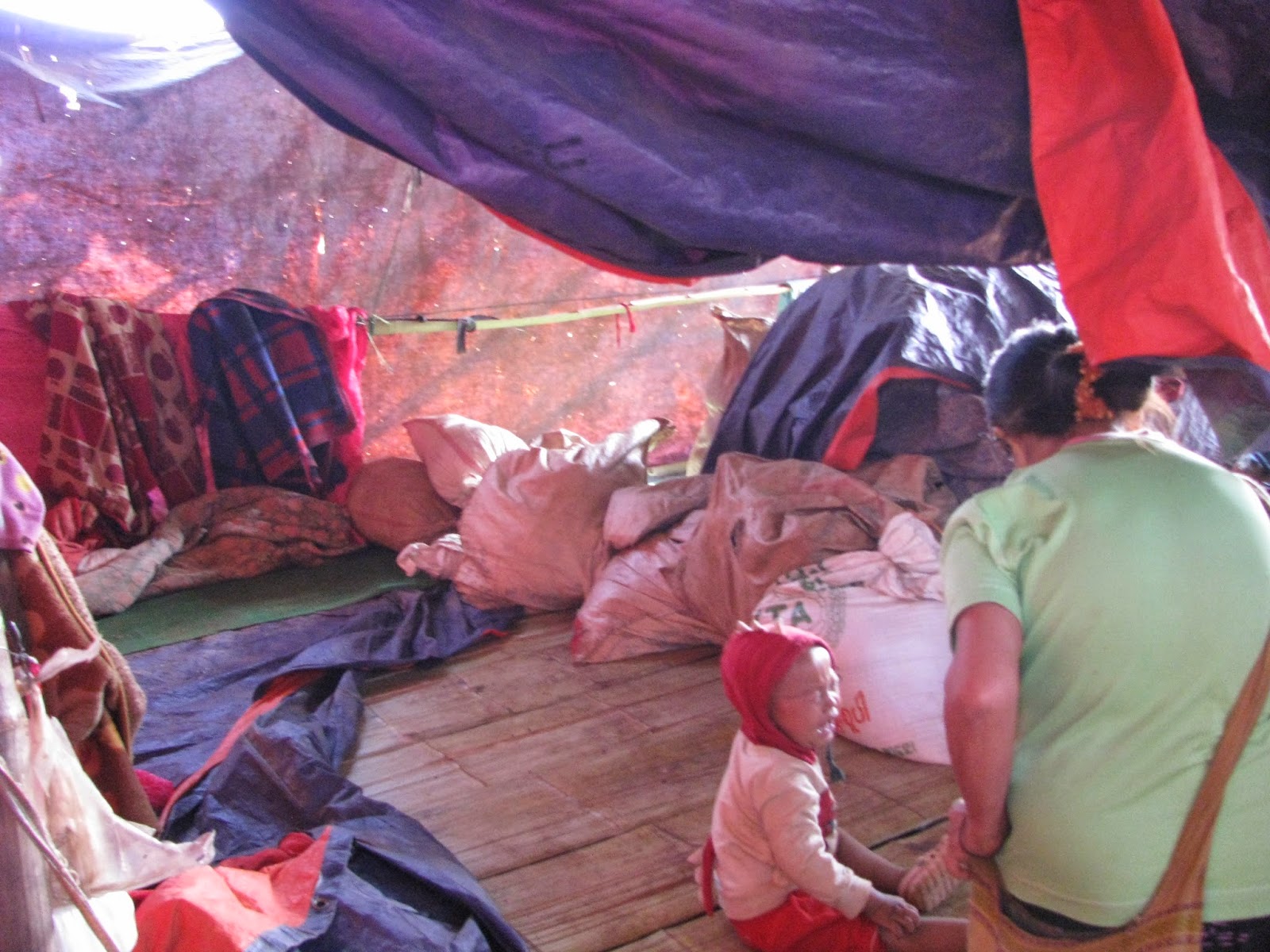 If God is willing, Stephen and Nick are planning to make their first mission trip to Laos and then continuing their mission trip to China this upcoming May.  We have just heard that there are over 30,000 Lisu people living in Laos and of course none of them have ever heard the Gospel of Jesus Christ.  We want to visit them and see how we can reach them with Christ’s Love.  We are planning to visit them before the raining season comes.  By then we will be busy teaching our AIS’ students, which the classes will begin in June.

My gratitude goes to every one of the Wongratanamajcha, particularly Mary who sacrificed her energy and effort for the mission work.  First of all, by allowing me to go on mission trip for a month and taking care of the family and all the mission works in Thailand while I was gone.  Isaac is on his summer break.  John is at his final pace at his school.  John is excited on his 16 birthday on this coming May 3.  Becky is beginning her internship by teaching English to displaced kids who live in our neighborhood.

Much appreciate for all your partnering with our mission works in making disciples and expanding His Kingdom in Southeast Asia and China.