A New Creature in Christ!

Every day we have reasons to “Thank” and praise our Living God and Lord.  We give thanks to God for His grace and for entrusting us to serve in expanding His Kingdom in Southeast Asia and China.  This is indeed grace upon grace that we have received through His son, Jesus Christ.

Every one of the Wongratanamajcha’s is doing great, busy with their own tasks and ministry.  Stephen has just begun his 6 week teaching courses, Greek for Ministry and Exegesis of Revelation.  On top of this, he has been taking students during the weekends for teaching and preaching practices.  Mary is busy with taking care of the needs of family and students.  Frequently, we are blessed to be able to host unscheduled visitors. This is a common culture for Asians. Becky, John and Isaac are busy in their studies.  Becky got straight A+’s in the past semester.  It is incredible!  Isaac is busy with school lessons and school plays.  John is now speaking English very fluently.  His school, GIS is struggling with legal problems, so they need a lot of prayers.  Visit their site at http://www.gisthailand.org/give-a-day-pay/

Nick is readjusting to the culture and to the language.  He was born in Thailand but has lived most of my life in the USA so he is very much “Americanized”, and not knowing much about the culture of Asia.  Within these past three months, he has been to China and Myanmar to establish relationship with leaders, Christians and non-Christians in these countries; and above all, to have a firsthand experience at the mission field.  He is now teaching English to the AIS’ students and having Bible studies with our Burmese students, at the same time.  He is also reaching to kids in our neighborhood (total of about 20 kids) via teaching English and incorporating Bible stories.  Since most churches in China, Myanmar and Thailand do not have youth programs, he feels that the establishment of youth ministry programs is a must and necessary in reaching out to the youth of Asia for Christ. 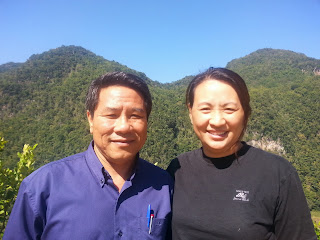 Mary and Stephen at the Thailand-Myanmar border

Our appreciation goes to Joe and Jerry Snyder who came all the way from America to teach 1 and 2 Peter for a week.  This helped Stephen a lot because this meant he could take a little break after teaching consecutively for 3 weeks and taking students to the restricted areas at the border of Thailand and Myanmar.  They even went and stayed inside Myanmar border for a week to visit churches among Lisu and new converts among the Wa people so the students could use whatever they have learned in their classes to the real mission fields. 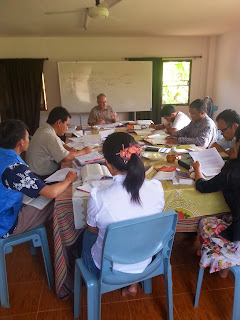 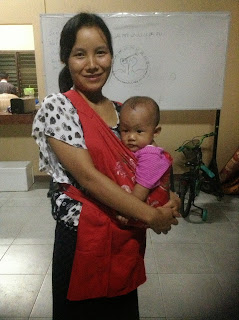 One of our students with her baby

Indeed for many years, we, along with many other people particularly the Wa brothers and sisters in Christ, have been praying that we would be able to meet each other face to face and encourage them through the Word of God.  Finally, God has answered!  With our Burmese students, Stephen visited the new converts among Wa people.  As one of the Wa leaders said “We can’t see God, but now we have seen you, therefore we praise the Lord!” 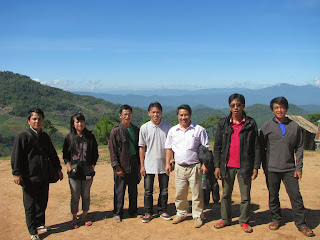 Stephen and the students at the border

Historically, Wa people used to be head hunters.  Twice a year, during planting and harvesting seasons, they would offer three heads to sacrifice to their spirits.  During the planting season, they would hunt for three human heads to offer to the spirits and their blood must mix with the seeds prior to planting the new crops. During harvest season, they would go out and find three more heads to offer to the spirits.
As Paul wrote in 2 Corinthians 5:17 “Therefore if anyone is in Christ, he is a new creature: the old things passed away; behold, new things have come!” (NASB).  In the recent years, several thousands of Wa people have accepted Jesus Christ and have been baptized; and the number continues to increase, weekly.
With Bible distributions; in the past few years, we have sent about 3,000 Bibles for the Wa people at Mai Tung, Myanmar, about 50 miles away from the Thai border, with our medical ministry; helping those who suffer TB epidemic in the area, and above all, God has moved among them through our evangelist, Kalip, several thousands of Wa people have turned from their traditional gods to worship the true and living God.  Like churches in Ephesians, once they were without Christ, being aliens from the commonwealth of Israel, and strangers to the covenants of promise, having no hope and without God in the world; now through God’s grace in Christ Jesus, they have become God’s children, and above all, they have seen hope in the Gospel of Jesus’ redemption. 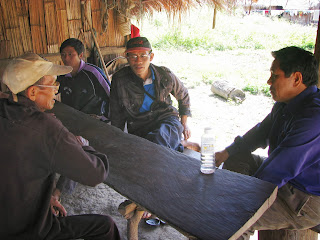 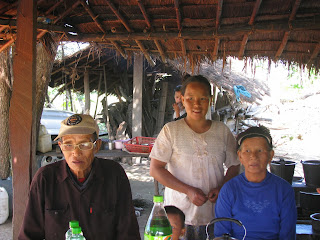 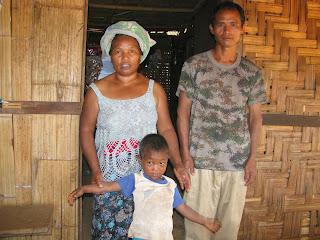 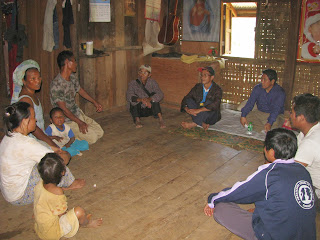 Stephen at a Wa house church 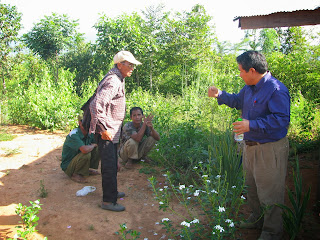 However, these new convert Wa are under people who claim to be “lord.”  They have to work for those lords days and nights.  Like feudalism during the Middle Age, these Wa people have to work for them.  For this matter, they have no time to work for themselves so that is why they live in very poor conditions. They have no rights, no freedom, and no pay.  If those lords want to move them suddenly, they would come with trucks and drag the villagers into the trucks and move them to a different place in order to work at those lord’s fields.  Most of the time, children and parents, husbands and their wives would become separated.  When this occurs, rarely do the children ever see their parents again, and same goes for husbands and their wives.  Imagine what it would be like if you were in their shoes? We feel deeply sad and helpless because we, mere humans, can do nothing. But God is able! We encouraged them that we have a mighty God who is able to help them to go through this terrible chapter of life.  Please lift these people into your prayers and ask God to be with them, and if it is in His Will, to liberate them. 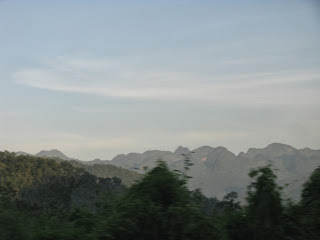 The view of the border from Myanmar side 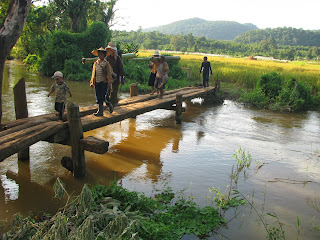 Lisu in the area coming back from their fields 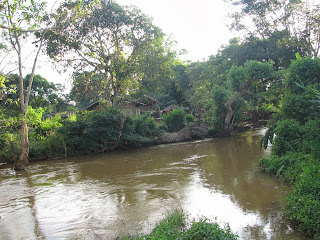 The house by the river that we stayed at 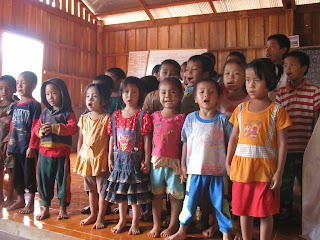 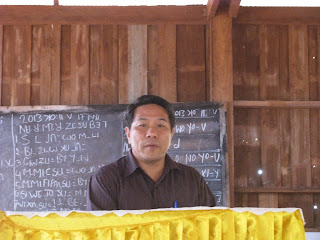 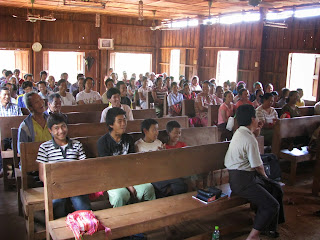 One of the Lisu congregations in the area

Much appreciation for your faithful partnership for carrying out the Great Commission to the lost souls in Southeast Asia and China.


Stephen and Mary
Posted by stephen at 8:19 PM