Our evangelistic trip to in March 2013 was another real blessing from our Living God and Lord Jesus Christ.  God was moving even at the beginning of the trip, particularly, a few days before Stephen’s departure, a girl called and asked to be baptized.  Since she was working that day, she only had a 30 minute break. We decided to baptize her in our bath-tub.  During the trip, God added several people to His Kingdom. Many house spirit were took down from their shelves and many people were baptized in the name of the Father, the Son and the Holy Spirit.  Praise the Lord!

Due to the security, we had to change our schedule several times during the mission trip.  Originally, we were planning to start our evangelistic trip from the border between Thai and .  We planned to go village after village from the tip of the border of Thai and gradually going through all villages from Tachilek to the very edge of northwest .  But we had to fly out from Tachilek directly to Lashio.  From Lashio, we went up , where most non-Christian Lisu populated.  used to be the center of opium lord residing.  However, it is the place where most local people still growing opium as the main cash crop.  Our evangelistic team had visited several villages at the area, teaching, evangelizing, and baptizing several people in the area.  Then we attempted several time but failed to cross over the mountain range to evangelize Lisu people in Doi Khi, where there are more primitive and more remote villages.  We concluded this was not God’s will for this trip.  After we went to Tan Yang, we found out that the battle was broke out between Burmese soldiers and Shan insurgent.  Several of local people were killed and severely harmed because the fighting.  All villagers from Doi Khi ran for their lives and fled to Tan Yang, where we met them and had opportunity sharing the Gospel with them.  At Tan Yang, our team divided into two groups, the biggest team continued to stay at Tan Yang teaching and evangelizing to those refugees.  The result was that many of young people expressed their desire to continue studying God’s Word.  Stephen went back to Lashio because he was asked to teach the book of Revelation to Bible students there for a week.  At Lashio, Ah Lay Bo (one of AIS’ students who came to Chiangmai and study God’s Word with Stephen) sets a Bible training center.  Every year during January to April, he opens for everyone to come and live with him and study God’s Word.  This year he had over 100 students.  Many of these students are non-believers.  Some of them are new believers.

is very remote and restricted for many people.  There is no electricity, no medical center for the sick people at the villages, no public transportation to and from those villages.  The dirt road for truck and motorcycle is the only way to get to those villages and it is available during summer alone.  Opium fields are everywhere.  However, God is moving everywhere we went to.  In many occasions God even answered immediately our prayers for the sick.  God has demonstrated his supreme power to those evil spirit worshippers through a very handful Christian in the village.  At one time, hail storm struck down all farms of the villagers, but spared only one field which happened to be a Christian’s field.  At other time, insect destroyed completely all crops starting from one field after another.  However, when these insect came close to a field that belongs to a lone believer family in the village, a flock of bird came and ate all those insects.  His field alone was spared by this epidemic.  All villagers were shocked and awed with such incidents. 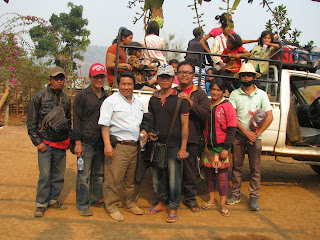 Our mission team also faced many difficulties both theological and cultural issues.  The theological issues, many of villagers are willing to accept Jesus Christ even asking us to take down their spirit shelf inside their houses.  But they refused to be immersed because they afraid after they were immersed they would not be able to sin any longer, for instance, they would totally forbid to eat food that were offered to idol, they would not be able to involve their traditional ceremony, etc.  Whenever they do so, they would face physical death.  Our team had spent most of our time explaining such a theological hoax.

Differ from many other villages, the young rather the older people of are exceedingly hungry for God’s Word.  The clash between the young and older generation is obviously intense.  While the young generation appeals to the Gospel, the older generation oppose to the Gospel.  Many young people eager to learn God’s Word, whereas the older people gathered together in order to find way to fault and accuse these young generations.  Therefore, Stephen set his time to meet with those older generation and discussed with them about their tradition faith and cultures.  He assured them that Christianity does not come and destroy their traditional culture, instead to make it effective in the life of Lisu people.  We, Christians, don’t neglect our traditional culture, but rather than worship the evil ones we are turning back to the original Creator of all things and worship Him alone.  Stephen then used the Lisu tradition songs applying the Scripture into the Lisu context and culture.  After hearing their traditional songs, the older people attitude had changed dramatically.  They said that they had never thought that a Christian can cooperpate well with their traditional songs and teach people how to live accordingly.  Many of them carefully listened God’s Word and joyfully laughed when it applied to their own condition.  Many of them have vowed to support financially their children to learn how to read the Lisu Bible.  Praise the Lord!

Much works need to be done in , more workers need to be sent and much prayers need to be offered so that those living in darkness will see the light through the Gospel of Jesus’ redemption.  Much appreciated for your continual prayers and supports.