Much of February was also similar to January. The Covid-19 cases seem to be escalating. At first, the government warned not to be in areas where large numbers of Chinese tourists visit because of the fear that more people could make contact with the virus. As the virus spread into Japan and Korea, the risk increased because these countries are where Thai locals like to visit; the Thais who recently visited these high risk counties could be bringing back the virus as well. The danger seems to stack up more and more. Furthermore, there’s a high demand on face masks and sanitizing alcohol products, and since the supplies are very low many shops have exponentially increase the prices on said items. With that being said, the government is now punishing those who sell these necessities at overprice with huge fines and even jail time. People suspected of having a hint of fever, are sent home and are quarantined and monitored by the local government staff. With the increased risks and government regulations, are we to just sit here and wait out the virus? Of course not! Even though our regular plans has been scratched, we must make every opportunity count!

On our end, we are trying to avoid going into the city unless we really have to. So, the first week of February, can you guess what happened? We had to go into the city… With extra care, Mary and Nick, with masks on, made their way to one of the biggest open marketplace in Chiang Mai to purchase mosquito nets for there is a huge need. Malaria and Dengue Fever are very common in Laos and so it was a must for us to enter the city. Anxiety definitely kicked in as we drove there. As we approached the market, we noticed that there weren’t many tourists or even locals walking around, compared to before the virus. It was a ghost town. With haste, we purchased and loaded the mosquito nets into the car and went home. After a couple of days, again we had to go into the city in order to load the nets onto a travel bus with the destination all the way to our friends in Laos. As we mentioned last time, due to the epidemic, we had to postpone our trip to Laos but we are still in constant communication with them. When the situation gets a bit better, Stephen and Nick will go and teach God’s Word to those evangelists and church leaders who are waiting to learn. 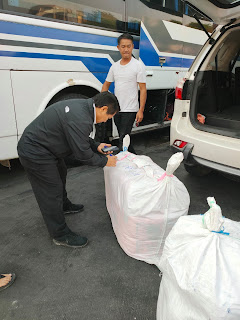 As many people have known that we live in an open culture society. Our house is always open. Visitors and guests are always coming. Some people come with an appointment, but most just show up. So as usual, many people came for prayers. One family in particularly came to ask Stephen to pray for their family, moreover to pray for their truck. Wow! They recently bought a secondhand car from a Buddhist person. In the Thai culture, many Buddhist people will put evil spirit alters in the cars, so the Christian family asked us to pray over the truck—for God to be with them even as they drive this vehicle! To put in perspective, many Asians will thank and dedicate even what they have purchased to an entity, in this case, to God. For some, it may be a concept that's hard to grasp… to spend dedicated time to actually praying to God over such items. It is common in the animistic context to pray over farms, fruit trees, gardens, houses, cars, etc. So, when animists become Christians they would like God to watch over even the items they have. You may think of it as when you pray before your meals; in Asia, they pray for everything, because they believe it is indeed a blessing that He provides and He has the power to give or take and to protect from evils. Oh, we have so much to thank God for! 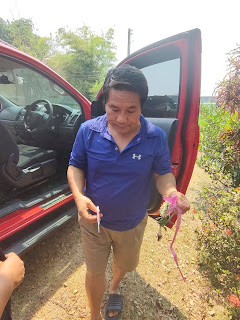 With a situational oriented mission works, Stephen and Mary also took time to visit and pray for churches and people who are in need. In one occasion, they visited one of the first faithful group of Lisu people who accepted Jesus the Messiah. During 1970-90s, Ngaw Pa was a great instrument for God in carrying out the Gospel among various villages in Northern Thailand. When Christianity came to the ethnic Lisu in Thailand in the midst of severe persecutions in those days, Ngaw Pa opened up his house and hosted many traveling evangelists and led them to evangelize to villagers at various villages. Due to his boldness in faith, many Lisu people have turned to Christ. When Stephen and Mary arrived at his house in the village, about 50 minutes north from our house in Chiang Mai, Ngaw Pa’s tears rolled down his eyes. They spent the afternoon praying, worshiping God, and sharing old stories. It was great to be able to pray and encourage him especially. He went through a kidney surgery and has been getting dialysis weekly (three times a week) because he only has one kidney left, which isn’t in good condition. All of us there thought about how short and precious life is and how many more visits we will have with him. Nonetheless, it was great blessing to make him smile and even laugh as they spent time together!

During another week in February, the Christian Thai Police and Soldier Association, along with many leaders from different Christian denomination endorsed by the Thai government came and met at our house. The fellowship and a meeting were to discuss on holding a big event for evangelizing in Chiang Mai (unfortunately it has been postponed due to the outbreaks of Corona Virus). We are very glad to be able to host this meeting at our house, to see Christians from different backgrounds come together and discuss how to win the lost and to give God the glory.

In addition, we had another great party for the kids in our neighborhood. Since it was close to summer break for Thai schools, we threw a little BBQ for the kids. Most of the kids who came were the ones whom Nick coaches soccer. It was awesome to enjoy an evening of BBQ and talk about summer plans and future goals. Many of the kids are leaning towards working as soon as they finish 6th grade.  It has been great to be involved in these kids’ lives. Many of their parents trust us a lot. Whenever they have some problem, they ask for Nick to help talk and teach the kids. All of their parents are worried about their kids’ whereabouts and what they are doing, but when they are with Nick, the parents really feel like their kids are in good hands. That is all thanks to God! Thank God for letting Nick use his past experiences, good and bad, as teaching examples for the kids and it allows Nick to be able to relate and have a closer relationship with the kids. Praise God! 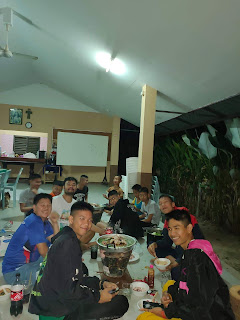 At home, Stephen has offered a special course for Isaac while he is on his summer break. In the evening, for an hour a day, with his dad, Isaac will study the core of Christianity—the cross, the death and resurrection of Jesus the Messiah. The death and resurrection of Jesus is not only the core of the Gospel, but also makes Christianity unique—distinct from other religions. The death and resurrection of Jesus is the center of Christianity in every aspects—grace/mercy, love, faith, hope, covenants, old/new creation, atonement, redemption/salvation, Christian leadership/servant hood, conducts, fellowship, baptism, communion and so on. The cross also demonstrates and reconciles God’s attribution—holiness, love, grace/mercy, righteousness, just and faithfulness, etc. This is indeed the fundamental course that we teach and preach to the new converts and lay-Christians. Because of Jesus, we risk getting sick for others and also have hope even in death. Because of Jesus, we have friends and family from many different backgrounds. Because of Jesus, we continue to share the Good News!