The rainy season has come early this year! Some people have lost their harvest because of too much rain, but some farmers and their crops are benefiting greatly. Many areas are flooded and completely ruined while other places are flourishing. Some people dislike the rain because it causes traffic, while some like it because it cools down the temperature.  Due to the unexpected and early rain, 12 young football players and a coach were trapped in a cave in the neighboring province of Chiang Mai, that is, Chiang Rai, Thailand. You may have heard this story on the news. Currently, a united group of international rescue workers have found the trapped kids and coach to be alive and are rescuing them. Like the trapped children in the caves, there are millions of people in this world, particularly in Southeast Asia and China that are currently still trapped in the cave of sin. Only Jesus can rescue them from the cave of death.

Stephen’s quick mission trip to Kachin State, Myanmar was full of God’s blessings. With our Light of Hope program, he visited a new orphanage near the border between Myanmar and India. This new orphanage is located at the heart of the battlefield in Kachin state. Most of these kids have lost their parents or separated from their parents because of the continuing war. For example, a 12 years old girl lost her mother during the war and lost contact with her father. Living without hope, after overhearing about the orphanage she traveled for 2 days and nights through the deep jungle in order to seek refuge. Thank you to many of you for stepping up and praying and helping with this ministry.

We received some funds specifically for this ministry and we were able to build a temporary shelter for the children, and also provide their basic needs such as food, clothes, sandals, mosquito nets, blankets, pillow, soaps, etc. Also, since the school year has started, we bought them their school uniforms, books, pens, pencils, etc. Soon the winter will arrive so the children will also need winter clothes and warm blankets for the coming chilly winter.

At this moment, we have built a temporary dormitory. The orphanage was built with bamboo. It is common for bamboo houses to last about twelve months at most. Unfortunately, this bamboo was cut and built during the rainy season. Because the bamboo is damp, it won’t last as long. This bamboo building is able to hold only 16 orphans plus a cook and a caretaker. Another 15 could not live at this orphanage so we asked a nearby nursery school to help house 15 kids, ages 6 and under. We are praying to raise money to have an actual permanent orphanage. 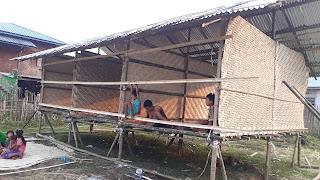 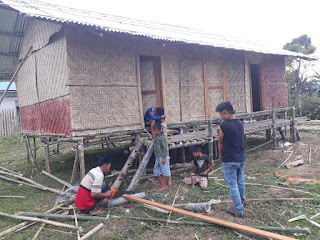 During the trip, Stephen also visited villages on the recent battlefield. Most villages were like ghost towns: hardly saw people around and many houses have been deserted. Once, those villages were crowned with tens of thousands of people, but now they are nearly empty. Because of the early rain and a new policy by the government restricting the setup of refugee camps, many displaced people were spread all over with groups as much as 200 people, here and there. Our team had to follow these dislocated groups of people in order to deliver their daily needs, for instance, rice and also give them hope through the Word of God. Several of the local leaders came to Stephen to discuss how to help those dislocated people move back to where they used to live. The major problem for these dislocated people is the lack of the basic human needs. However, after Stephen left for a different area, Danai faced severe flood and Hpakant faced landslides that killed a dozen people in the area. Stephen was able to leave on time before those natural disasters happened and before the roads were closed. Thank God for protecting Stephen as he traveled around Myanmar. One of the greatest blessings during the trip is that he had an opportunity to share God’s Word to different groups of people, churches and Bible training centers. Wherever he went God had always opened the door for him to deliver God’s Word.

We have guests from all over Asia, both overseas and Thailand. Almost every day we held a meeting with those guests.  One instance, a senator from Myanmar came and visited our family. He was on his way home from a conference in UN in New York and in Bangkok. Thank you God for connections like these so that we are able to spread the Gospel freely where ever we go.


As for Isaac, he was requested from his school to participate in the American exchange student event. He was chosen to be a translator from Thai/English and English/Thai. He was also assigned to be a guide for the American students on the culture of Thailand and his school in particular.  During those days, he was interviewed and went through several tests. The result of his tests reported that his English was at a college level. We are very proud of him.


Becky and Nick have been working on curriculums to teach the youth in Myanmar when they go there to teach English. They will incorporate biblical stories into their lessons. Nick also went to visit a military boarding school to spend time with primary school aged kids in Chiang Dao with his Thai Christian friends. Many of these kids come from families with poverty, jail problems, and drug problems. He is moved to tears as the kids were joyful to get the simplest things such as a new soft pillow. Mary and Nick also visited a church/orphanage at the border of Thailand and Myanmar and were able to encourage and spend time with the caretakers, kids, and the Christian leader there.

Now, Mary is about to grow her new rice crop. Her land is ready. She’s just waiting for a bit more rain in the area. As for Stephen, he is teaching the Synoptic Gospel via Wechat messaging application. This week his teaching focuses on Matthew 24 and Luke 17. On top of that, there is a group of Naga students from India wanting to come and study God’s Word at Asia International Seminary. However, Stephen is considering to offer them classes at Myitkyina, Myanmar rather than in Chiang Mai, Thailand. Stephen is trying to shift the AIS’ classroom program into a distance learning program that is closer to their home. However, the Seminary is facing a shortage of a qualified professor. Due to the lack of professors, the Seminary is not able to run as it should, please keep the Seminary in your prayers. We deeply appreciate your prayers for AIS!

John is nearing the end of his internship at McMinnville, Oregon. He has enjoyed his experiences working with kids at summer camps and with the youth group. He says that it has been a true blessing to be a part of such a great ministry and loves the people there! Please continue to pray for him and his work that he is doing. If you would like to learn more about what John is doing, you can read his ministry adventures at www.johnnywongy.blogspot.com