Happy New Year! We thank God every year for his blessings. We look back at the year 2016 and feel extremely blessed for all the works that God have provided us and for all our friends and church families that have been with us through the ups and downs. We have many great visions of what we would like to accomplish in the year of 2017 such as helping the displaced Lisu people in Myanmar, starting to teach in China using the Bible, and further equipping leaders from different areas of Southeast Asia and China through teaching and providing more commentaries on the books of the Bible in the Lisu language. We know that anything is possible through the Lord and that He alone provides for everything. We also know that He has graciously given us friends and church families to help alongside our missions through prayers, supports, and encouragement.

December 2016 was another month that was extremely busy. First, Stephen and Nick traveled to China for the yearly Lisu Cultural Conference. The conference itself, for most of the people there, was about the preservation of the Lisu culture and the Chinese government even sponsored this event; for our team, this yearly conference is not just a cultural symposium but a way for us to evangelize to the Lisu in China. As you may know, we have been invited to this conference every year, and Stephen has always been invited to speak. This year Stephen spoke on the topic that had been controversial in the past: How Christianity does not destroy the Lisu Culture. You see, in the past, many Lisu in China were against Christianity; they used to even discriminate and even mock Christians. We can see this year, how just our attendance over the year has made great changes for the better for the Lisu in China. The first Lisu Cultural Conference in China that Stephen attended was extremely rough. All the non-Christian Chinese Lisu smoked wherever they wanted to and drank a lot of alcohol during meals. Actually, it is a Chinese culture to give toasts to everyone in the room, individually; so you can imagine if they had to take shots for every person in the room, how drunk they became. Stephen was the only Christian that attended all the important gatherings and even spoke about the Lisu culture especially to represent the Thai Lisu. Throughout several years that Stephen has been there, he would toast people with tea and people noticed that; they noticed how Stephen was very different from them and they really respected how “good” he is, but we know that’s the work of God. Fast forward several years to this past month, the meals no longer contained alcohol and most of the Lisu that attended no longer smoked or some quit drinking. This was a huge thing that we saw. On top of that, many of the Lisu people from China, Myanmar, Thailand, even India who attended this conference have now announced that Christians are very respectable and the Lisu community would like to imitate our actions to make the Lisu people more respectable. Furthermore, the Lisu community has agreed to learn the Lisu language, as recommended by Stephen, and the only way to learn the Lisu written language is through the Lisu bible. These are major steps in our evangelism in China that God has blessed for us. We say that this is the works of God because we have heard many people going into China and even mentioning the bible or Christianity and being locked in jail or deported. God is truly moving in China, some of Chinese Lisu have even asked us to pray for them and some of them are even beginning to pray to our Living God on their own. We are truly blessed! 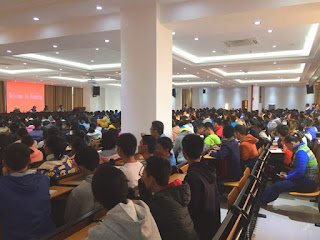 After arriving to Thailand from the China trip, Stephen and Nick along with Mary went up to a village called Lin Luang, Thailand for the Christmas festival, the day before Christmas, in order to meet with Lisu people from throughout Thailand. You see, the Lisu people in Thailand treasured the week long Christmas festival because it was a week during Christmas that everyone gathered together and worshipped. At this festival, Stephen was able to hand out the remaining commentary books on Revelation to the Lisu leaders and pastors in Thailand. People were really excited to get the Revelation commentary and right there, even before they started reading the commentary, they asked Stephen if he would have a week long class to go through it with them and for any questions they may have.
Actually, on January 4th, a group of Christian leaders from various denominations from northern Myanmar came to Thailand to study the book of Revelation with Stephen. These Myanmar leaders have all read the Revelation commentary and have requested to study in Thailand with Stephen because they are very interested in studying Revelation more in depth. The problem is that many of these Lisu leaders have held on to the teachings of the early 1900s missionaries rather than studying from the Bible. Please pray as Stephen teaches Revelation to this group of leaders. 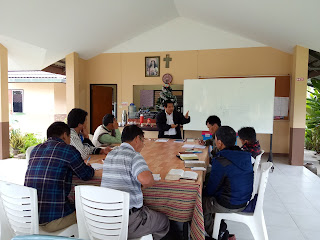 As Christmas approached, the family had a Christmas party for the Shan (a people group from Myanmar) kids from our neighborhood. This year there were many churches in the mountains that invited us to attend their Christmas festival, but we felt that we should spend time with the Shan kids in our neighborhood because they had been waiting for this party all year; some of them even begged us to have a Christmas party months prior to Christmas. So this year we threw a Christmas party for these kids, and it was truly a blessing to be a part of this event. The party consisted of games, giving gifts, food, and most importantly, the Truth. This year, many of the Buddhist temples in the area had celebrations in order to draw kids and families into the temples, but these kids still came to our house. Mary asked them why they didn’t go to the Buddhist temple parties, and they replied that they felt more at home at our house. It was very heartwarming to watch these kids that have nothing eat happily, open presents with smiles, and just laugh with us. We know it is extremely hard for them to accept Christ because their families and community enforce the traditional Buddhist ways, but we are hoping and praying that the seed of Truth that we plant inside them and will one day grow and they will choose to be His faithful followers. 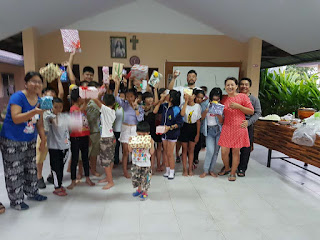 After the Christmas party, we noticed that the kids were reluctant to go home, so we invited them to camp out with us outside of our house for the New Year Countdown as well. They were beyond excited! We asked the kids to bring their blankets and a tent because we have only two, but when the evening of December 31st came around, about 15 kids showed up bringing nothing. We felt sad because we knew they probably didn’t have any to bring, so we had all the smaller kids sleep in the two tents, one for girls and one for the boys. The leftover bigger boys and Nick slept outside with just blankets. It was a great time for the kids and for us. We all enjoyed food and hot chocolate from the campfire; it was a good way to bring in the New Year!

We are looking forward to 2017. Praying that the year of 2017 brings another blessed year for our family and ministry. If God is willing, Stephen is planning to publish at least three more commentaries in Lisu: Hebrews, 1 Corinthians, and Romans. We have seen that the commentaries have become a much needed and important ministry among the Lisu Christians in order to equip them to be rooted in the Scripture, God’s Word. Then taking this commentary and reaching out to the church context and teaching them book after book.

If God is willing, the Wongs would love to make a trip back to the USA in order to visit our friends and church families. Particularly, this is Isaac’s wish for his Christmas and New Year. Almost every week, he says I really want to go to America or I want to eat turkey or I want to see the place I was born. We know this is up to the Lord, if He prepares a way or the right time.
Also, please pray that God will send more field workers since our ministry has extended into many areas in Southeast Asia and China. Many more ministries have opened up. Many callings have been echoed. All of these have happened not because we are special people, but because God’s grace and blessings that He has given to us this great Kingdom Works!