Recently, mornings seem to bring in a cool crisp air that takes us back to a memory of autumn in America. The temperature in Thailand is starting to drop as we are approaching the “cold” season, but there will be no color changes in the leaves or snow fall. The days are getting shorter and another year is coming to an end in a couple months… but God remains ever-powerful, ever-loving, ever-wise, and ever-present. God is working and we are excited and blessed that He chose to let us be a part of His Great Works!

Mission to the Lisu in China

As you may know, recently, Stephen was invited to go to Toeng Chong and Ying Jiang, China by the local leaders. Stephen felt God working and opening doors during the trip. For this trip, the local Lisu Chinese leaders in these areas had asked Stephen to come and talk about how the Lisu Culture has a place for our Living God. Originally, the Lisu thought that to be a Lisu, you must be Animist, but Stephen described that the Lisu, anthropologically, actually believe in a Creator God, and so he presents our Living God to them. Through building relationships with people, sharing the Message, and showing them Christ’s love, our ministry is growing abundantly in Southeast Asia and China. In the past several years, many non-Christian Lisu in China, Myanmar, and Thailand are left to contemplate their beliefs through this teaching and many have asked us to pray for them, and some have even announced their faith in Jesus Christ and be baptized in the name of the Father, the Son and the Holy Spirit! God is good!

The trip was also special because Stephen was able to visit the place in Toeng Chong where he could trace back his ancestors all the way to the year of 1520; even today, in that area, his relatives still remain and are leaders among the people. Most of his relatives, in this area, are non-Christians and some are even the Shaman, or witch doctors, of the village; an interesting fact about the Lisu people is that only the Shaman are allowed to do the ritual climbing of the ladder of swords. When they climb up these ladders, most of them invoke the power of the evil spirits and are able to climb up without being cut from these sharp blades. After meeting Stephen and finding out that he’s a man of God, these leaders (both Shaman and government authorities, which are relatives) stated that they are now accepting of relatives who are Christians. This is wonderful because in the past, these people in this area were really against Christians, and even persecuted Christians; now, they are open to relatives who are Christians as well because they said that whether the Lisu relatives are like them (Animist) or Christians, we are the same clan of Lisu… basically, we are family. This is the work of God, the One who opens doors for us when we least expect it. This trip, Stephen even found out that some of his distant relatives (within the same clan) are still living in Mongolia today. 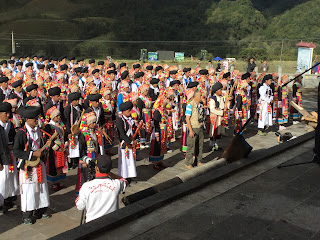 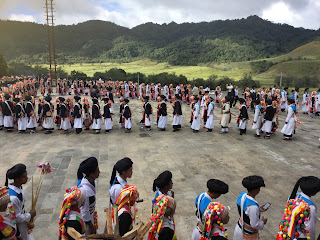 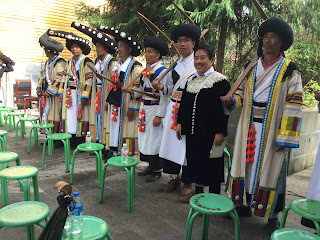 Stephen with the Lisu Cultural leaders 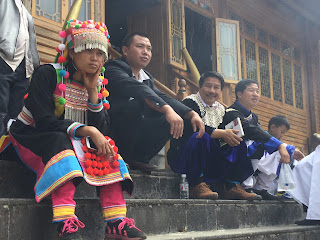 Stephen sitting with a government leader 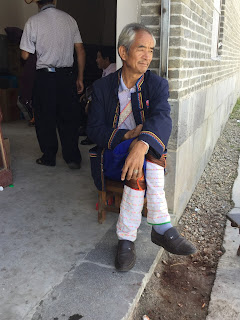 The head of shaman
who is Stephen's "brother" (English-- a Cousin) 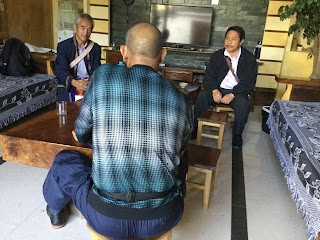 Stephen with the head of shaman 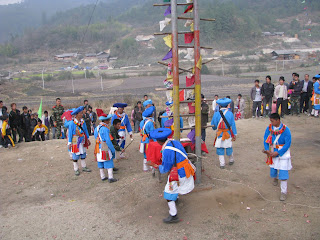 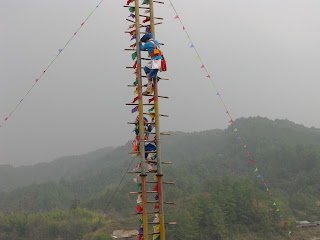 During this trip, Stephen was asked by several churches in the area of Yin Jiang to come and preach to them. It was a bit scared at first because usually the Chinese frown upon people from a different country to speak about Christ in China. But since he was considered as a family, Stephen went to preach and the people were encouraged to hear the Word of God taught to them exegetically. The Christians in the area were requesting for Stephen to come back and offer them a Biblical conference. The non-Christian leaders in the area also requested for an English teacher to come and teach to their government schools in the area as well. Again, God is opening doors where we are least expecting. When Stephen returned, he was extremely tired but was glad that God is working! China is calling for deeper understanding of the Word of God; they even set up a group on WeChat (one of the most popular messaging apps in China) in order for Stephen to preach to Christians in many parts of China through this messaging application.

Furthermore, Stephen has been invited to a larger Lisu conference in China this upcoming December where he will be a guest speaker. As a guest speaker, he will be speaking on the topic of Christianity in Lisu; Stephen will be showing how our Living God is what the Lisu people, who believe in Creator God, have been worshiping indirectly all along. 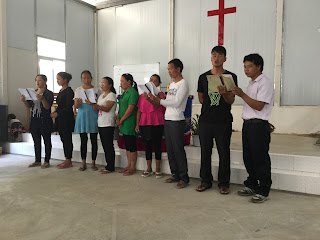 A choir at church in Ying Jiang 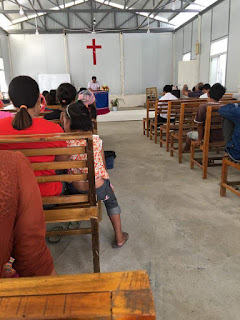 Stephen’s exegetical commentary on the book of Hebrews will be finished once it passes the proofreading stage done by several Lisu scholars from different parts of Asia. Hopefully it will be ready for publishing in this upcoming November-December. Originally, the plan was to provide these texts at the price of the print but the majority of the people that want to study the Word come from below the poverty line. So, we are praying that God will open doors in order for us to be able to continue to print and distribute to the people who seek to study the Word of God and aren’t able to go to a Bible school. Praise the Lord for providing the need for His Kingdom’s sake! At this moment, we have already received a gift that will go into the cost of printing the commentary of Hebrews. God is good and faithful!
The Lisu commentary on the book of Revelation was a huge success, because now, even Lisu in China, both believers and non-believers have requested for copies of the commentary. Please pray that God will use this ministry to bring more people to Christ.

Isaac started at his new school, Sarasas, and he’s loving the school. He first attended school this past week and immediately excelled; he’s even asked to stay after school to play with his new friends. Sarasas is a school that teaches the kids to think critically and be able to understand what they learn, but Isaac’s previous school seems to just drill information and have the kids memorize the answers. At Sarasas, Isaac is learning yet another language, Japanese. Isaac now knows Lisu, Thai, English, Chinese, and soon Japanese. Becky helps Isaac with homework and is also typing dad’s notes on the Old Testament Survey into computer form. Mary continues to fight with her up and down emotion, every day. John seems to be busier now because he hasn’t had as much time communicating with us, but he seems to love Boise Bible College and the people there. Nick continues to teach and help out at the international church in Chiang Mai; he has also been prepping for the trip to Myanmar and China, with Stephen, in the next couple months. Please continue to pray for our family.

God is amazing and ever loving. We thank God so much for everything that He has provided. We thank God for friends and Churches that love us and encourage us. And through the God’s love and the love that we receive, we want to share this love with the Lost in Southeast Asia and China. Please feel free to ask us any questions about our ministry (e.g. if you’re interested in teaching English in China) or if you’d like to partner with us in our missions at stephenwps23@gmail.com

Please also pray for Thailand during this time of mourning for the loss of our beloved king.