August has brought rain of blessings. The rice patty behind the house has received a lot of rain and is refreshed by the hydration. As you may remember in our previous posts that last rice season was very dry and so we lost that season’s harvest of rice, but God remains ever so generous by providing plenty of rain this season and the stalks of rice look beautiful as ever. We praise God for the amazing gift of rain so that we may be able to have rice and to share it with the ministers and students that come to our place.

Rain was not the only blessing that came this August; this month was Stephen and Becky’s birthday (15th and 23rd, prospectively). We had a joint birthday celebration on the 20th to celebrate both of their birthdays on the same day. This was a special day because we invited Lisu from the surrounding areas; many of the elderly Lisu, retired evangelists and former preachers and their families and even one of the first native evangelists who brought the Gospel of Jesus Christ from China to the Lisu in Thailand in 1958 came and blessed Stephen, Becky, and also the family.  It was a very remarkable day for our family. By the mercy of God, we humbly thank God that we are able to celebrate Becky’s birthday because as many of you know that if it were not for God’s healing, Becky would not be with us today. This birthday celebration was also very special because it was the first time that Stephen revealed his real birth-date (as opposed to the birth-date on his ID card set by the government). Stephen has had only one birthday in his life about 20 years ago but at this time he was thrilled to have local Lisu people come and celebrate this day with us. Mary gave him the best present ever, a wild rooster that Stephen has always wanted since he was a little boy. All in all, the celebration was focused on how great God’s love is for the family through friends we have, through churches that love us and partner with us for carrying out the Great Commission to the lost souls. 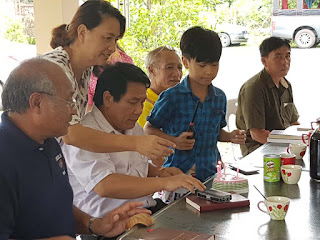 Mary, Isaac are helping
Stephen to light the Birthday candles 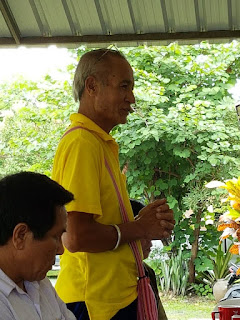 An Elderly evangelist
giving a word of blessing 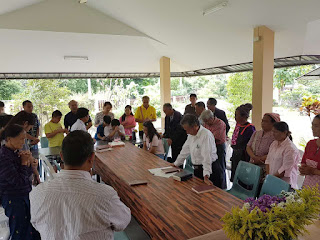 Prayers for Stephen and Becky 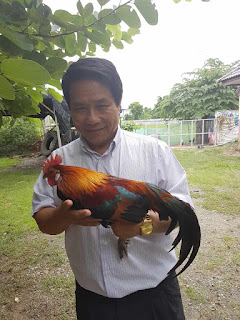 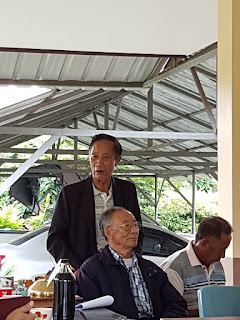 The most elderly evangelist that came to the birthday party was Jeremy. Jeremy was one of the first Lisu evangelists to come to Thailand in 1958. He came from a church in the South Western parts of China. Along with 4 other evangelists, Jeremy was sent because the churches in China found out that there were Lisu living in Thailand. The team of evangelist came to Thailand and was imprisoned at first because the Thai police thought that these were a group of Chinese Communist trying to spread Communism into Thailand. The whole time they were in captivity, they sang Lisu hymns; through the love and grace of God, they were released because the Thai police finally came to a conclusion that these evangelists were probably not Chinese Communist coming to spread propaganda. The group walked from China to Thailand and surveyed the Lisu villages in Thailand for a total of about 3 months. They realized that none of the Lisu in Thailand were Christian; so, they began telling the Gospel to all the villages they visited.

After the 3 months, they went back to China but sadly during the 3 months they were away, Jeremy’s wife had passed away. After some time, Jeremy married Leah and had 2 little girls (including 1 son from his previous wife). In August of 1966, the Chairman Mao Zedong launched his Cultural Revolution. The Cultural Revolution severely impacted Christians in China. Many Christians were killed and others were imprisoned and tortured. During this Cultural Revolution, Jeremy took his family and fled in the night amidst gunfire. They had to hide in caves and ate raw corn from the stalks until they arrived in Myanmar. After spending some time in Myanmar with the Christian churches there, Jeremy and Leah had another son.

As time passed, the church in Myanmar sent Jeremy and his family into Thailand to evangelize and start church planting. Jeremy and his family finally settled in a Lisu village in the mountains of Chiang Dao, about 2 hours from Chiangmai. Today, Jeremy is the only living evangelist from the group of 5 that came to Thailand in 1958. Jeremy and his family have been through a lot in their lifetime and made it because of the grace of God. Even now, Jeremy continues to evangelize. In the story of Jeremy, Mary, Stephen’s wife, is actually one of Jeremy’s daughters. Mary can still recall the memories of when they fled China. Isn’t God ever so wise and awesome in how everything unfolds? Ironically, today, Stephen has to go back to China to evangelize to those areas of Southern China where Jeremy was sent from back in 1958.

Once in awhile, the Lisu people from China would call Stephen from the airport in Chiangmai and inform him that they are in Chiangmai and want to visit him. Through Wechat, the most popular internet communicating channel for the Chinese, Stephen has been informed that there will be a group of Lisu people who are preparing to come to our site to study how to read the Lisu language. The group are nonbelievers, but they have been demanded by the local authorities to study the Lisu language since many of them are illiterate in their own language.  We believe this is God’s plan so that the group will be able to read the Bible after they know how to read in Lisu. Here is a cultural information for you: most Asian people, the Lisu in particular, will not inform you the date of their arrival or departure. Indeed, it is considered rude to ask the guests when they will arrive or leave. When they come, they come! This is the reason why many times Stephen was called from the Chiangmai International Airport abruptly to pick them up or to prepare for their visitations.

In order to avoid traveling due to the land slide, flash flood, road blockage during the monsoon season, Stephen has been in his office, studying through the whole Old Testament in order to prepare himself for the upcoming teachings at Bible conference in Myanmar.  He went through some of his Old Testament exegetical notes which he studied under Dr. Gary Hall at Lincoln Christian Seminary and revisiting his biblical Hebrew language. Stephen, Nick, and the team will go to Myanmar for another teaching week, as we have done in the past. Currently, we are waiting for the Lisu leaders in Myanmar to confirm the dates, but at the moment it seems they are facing big floods. Actually, in our surrounding areas in Thailand, there are also floods. Please pray for the people affected by the floods. Speaking of Myanmar, Stephen’s commentary on the book of Revelation is being passed out to many churches in those areas. The flood has put a hold on some of the areas that have requested the commentary. Please pray that the people will be able to learn and understand the Word of God even more. 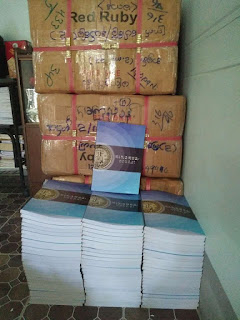 Commentary on Revelation in Lisu


Please continue to especially pray for Stephen. In the traditional culture of the Lisu, all children are required to have a godfather. Stephen, when he was young and before he was Christian, due to the fact that he was a son of a Lisu leader, actually was dedicated to have a godfather that was of the evil spirit. Very few people have such a godfather! In such a case, almost all of them turn to be a shaman at their proper ages. Because of God’s grace, Stephen is exceptional by becoming God’s child. So he needs to continually be in the Word of God every day in order to have peace in his mind, heart, and spirit. The power of God prevails always! Continual prayers for the spiritual battles in our works is much appreciated.

Mary is also feeling better and regaining strength from what all women eventually go through in their lifetime. Please continue to pray for her. Becky has been teaching English using the Bible and Christian songs at the house to her students. Isaac is still as studious as ever and is waiting for a short break coming up soon. Nick has been preparing bible lessons for the youth as well as evangelizing to Chiang Mai University students. Nick and Stephen has been talking to a former United Nations staff in order to discuss the possibility of projects that will help not only the Lisu but also other people groups in Myanmar as they fight poverty, drugs, human trafficking, and other problems. Please pray for this as we approach the mission field with a Wholistic ministry: providing the people with both the physical and spiritual needs in order to become healthy churches. 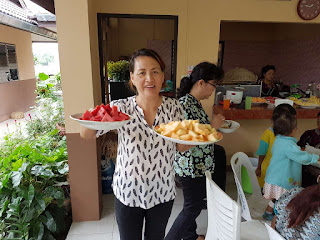 Mary with her serving heart


We are very much appreciated for your prayerful and financial support for the sake of His Kingdom.

In Christ Alone,
The Wongs