We would like to take this “Thanksgiving” season to first thank God for His grace in liberating us from the kingdom of darkness into the kingdom of Light, from worshipping the evil ones and the spirits of our ancestors to serving Him, the true and Living God.  We also thank all of you who have been our faithful partners for carrying out the Great Commission in Southeast Asia and China and for being the faithful channels of His blessings for our family and ministries. 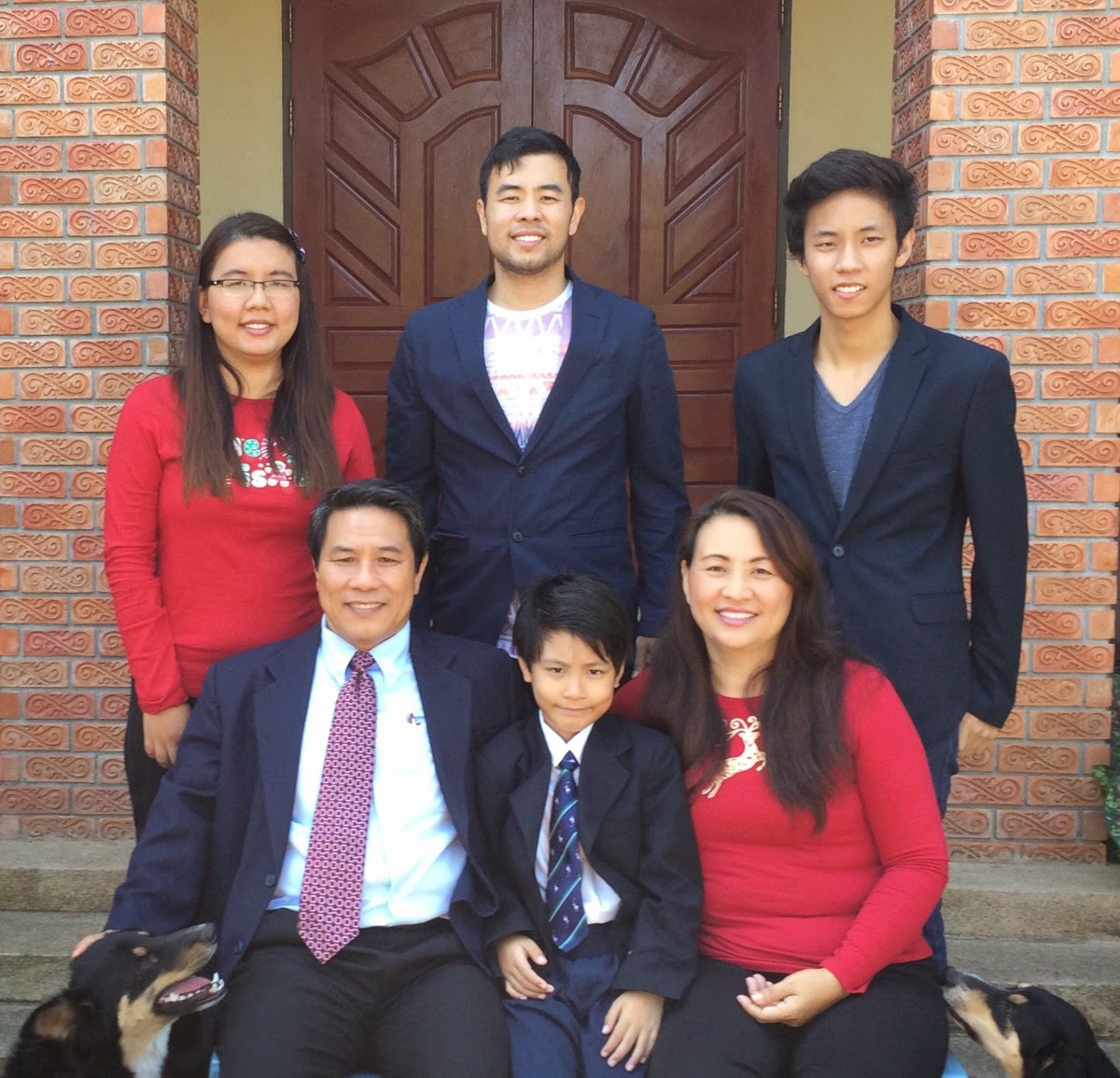 Since Stephen will have to make almost a month long mission trip (Joe Snyder and Nick will join him on December 14-22) to the very north of Myanmar for biblical teaching to all Bible teachers in the area of Myitkyina, we would also like to take this occasion to brief you about the lives and ministry of the Wongratanamajcha throughout the year of 2014.  As you have known already, our ministry always emphasize on a wholistic ministry, focusing on a person as a whole being for life-transforming both in spiritual and physical dimensions.  Our ministry is not changing a person from one’s religion to another, but one’s whole life which is transformed after accepting Lord Jesus as one’s own Lord and God.  The spiritual dimension can be nailed down into 3E’s: evangelism, equipping and empowering.

Evangelism for us means carrying out the Gospel of Jesus’ redemption to the lost souls or unbelievers and to those who have never heard the gospel.  Without being ignorant to our neighboring unbelievers, many of these people happen to live in restricted areas or very remote villages.  Thanks to God for He has been faithful in adding a good number of people to His Kingdom during this past year, whether in Thailand, Myanmar and even in China both through ourselves or our teammates.  We have always reminded ourselves not to boast on those numbers!  It is indeed His ministry (not ours), we are only His tool.  Praise the Lord!

However, we are anxious to bring more people to His Kingdom, particularly to those who have never had an opportunity to hear God’s Word.  We are praying this coming year of 2015, the evangelistic door in Laos would be opened for us.  As we mentioned in our previous letters that they are Lisu people in Laos who have never heard the gospel of Jesus.  And we did prepare a lot of time in the past few months, but it seems that the door has not been opened for us yet.

This coming summer of 2015, we are planning, if God is willing, to carry out the Great commission of Jesus along the border areas on the mountain ranges between western China and Myanmar.  There are hundreds of thousands of Lisu people both in China (Yinjiang-Tengchong) and in Myanmar (Lasio-Myityina).  These Lisu people are still worshipping the evil spirits and their ancestors, and many of them, particularly in Myanmar side, are still growing opium as their main cash crop.  Also, over two hundred thousand non-believer Lisus in Lichiang areas has requested for us to teach them how to read the Lisu language so that they will be able to read the Bible.  Sadly this request has not been met yet.  Please lift us all and these evangelistic needs to be fulfilled according to God’s will. 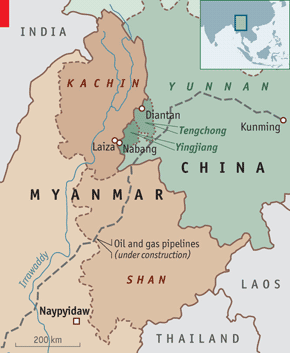 For several years, a great number of Wa people at the border of Thailand and Myanmar have turned to the Lord.  After helping many years and providing several thousands of Bibles, we (as we did to the Wa Christian in China) now are advising them to become self-supporting churches, self-governing and self-evangelistic churches.  However, we will be available to provide them spiritual food through teaching them God’s Word.  We are now turning them from evangelistic to be an equipping stage.

As you have known, Myanmar has changed drastically in the past few years.  Myanmar has become a more and more open to foreigners and foreign businesses along with foreign missionaries.  Once Deng Xiaoping, a former chairman of China warned his Chinese people when he broke down the Chinese Bamboo Wall.  He astutely compared his opening country with an open house door.  He said something like this: “when you open your door you have to be careful for both good and bad animals would enter into your house.”  The wise knew to take the best out of them.

In the past few years, we have tried hard to teach God’s Word to several hundred thousand of Lisu Christians in Myanmar to be ready through various occasions; leadership conferences and youth camps for the changing so that they would be rooted with God’s Word before the storm of human teachings and modern technologies come, lure and ruin their spiritual lives.

Our focal emphasis on equipping is Asia International Seminary (AIS).  Since September 2009, we have started AIS to offer an opportunity to many of those who desired to study deeply in God’s Word while working full time in their ministries.   We have had the great privilege of hosting Christian key leaders from Thailand and Myanmar at our house while teaching them the Word of God at Asia International Seminary.  This is one of the many wonderful ministries that God has blessed us with.  This type of ministry has become a model for many other Bible schools.  Indeed, we are so proud of these students who are now solidly rooted their lives and ministry with God’s Word.

Now we are planning to empower our students by mobilizing them to teach other Christians in their home country.  Throughout their studying times in Thailand, we always took these students out during the weekend to practice in teaching and preaching on what they had learned during the week.  Many churches in Thailand have been blessed through this weekend ministry of the students.  Now we anticipate that many churches in Myanmar will receive such same blessings.  Above all, in the coming years, if God is willing, we would like to offer these exegetical courses in Myanmar which are mainly taught by the students of AIS so that our future students in Myanmar would not have to come to Thailand.  In this way, church members in Myanmar will gain the fruits of our empowering process.

Our Samaritan ministry is visible and tangible for many people to acknowledge God’s love for all human beings without discrimination not only through our preaching words but also through our deeds, meeting the physical needs of the people.  Throughout the year of 2014, with the one-time help from IDES and Lincoln Christian Church, we were able to drill water and build a water system for over sixty orphans and over hundreds of Bible students in the Northeastern part of Myanmar.  This water system became the main source for their daily usage; cooking, drinking and etc.   Many hundreds of local people, both Christians and non-Christians are able to “Thank” God through this water supply.  Moreover, with the one-time help of IDES, over 60 TB (tuberculosis) patients , at least twenty one of them are under age of ten and six of them are a little over a year old, have been saved from this deadly disease.  Over 100 malaria patients have been cured and over 300 mosquito nets have been distributed in order to prevent this fatal sickness.  The TB and Malaria program covers the central part of Myanmar to the very northern part, the hidden valley, of Myanmar.   Praise the Lord!

Since we have returned into the mission field, we have tried to bridge these differences through the wholistic mindset via a cultural sensitivity.  In the past March, with the participation of several missionaries, we held the Lisu cultural conference for the second time.  At one evening over 30,000 Lisu people from Thailand, China and Myanmar attended at this conference.  The wall of hostility between believers and non-believers has been mostly torn down.  Many of the non-believers in some villages in Thailand have started to learn the Lisu alphabet.  Several key non-believer leaders at the Lisu autonomic areas in China have requested us to teach their people how to read the Lisu language.  This is ultimately leading them to read the Lisu Bible.  Most of them have a very positive perspective on Christianity.  They have acknowledged that Christianity is well congruent with the Lisu culture, if one knows how to apply them correctly into their daily lives.

Every one of the Wongratanamajcha has been a real blessing to the family life and ministry.  Besides Isaac, the rest are enrolled in the ministry according to each individual’s gift.  Mary has organized our site being the living environment to congruent with a farm nature; growing rice, raising chickens, planting vegetable and seasonal fruits (banana, papaya, mango, lemon, and etc.) which all are used for self-consumption.  She has taken care of daily needs for the family, students, visitors and even neighboring displaced children.  She often took times off to visit a hospital downtown and brought food for those patients and relatives who came from the mountains.  Becky, Nick and John have taken turns in teaching English to our AIS’ students.  During school breaks or Saturdays, Becky has also taught English to the dislocated children.  Becky is now on her last semester at her university.  Nick has taught English for a living while continuing to raise his youth ministry support.  Often, he took his time off to make mission trips with his dad so that he would be able to be equipped.  Almost every weekend he followed his dad to visit churches at villages on the mountain and preach alongside his dad or sometimes with the students of AIS.  John has changed dramatically throughout the year.  He has grown and matured even though he is in 11th grade and he is still keep growing.  As always, Isaac has been the “laughter” bringing smiles to everyone.  He is studying English, Thai, and Chinese at his bilingual school plus he speaks Lisu at home.  His English is at the top of his class.  He has surprised his teachers on his Thai test.  Over all, throughout the year, our family has daily various reasons to “Thank” God and we are continuing to anticipate the greater blessings, and on occasions both family life and ministry wise to praise Him even more in the coming years.

May the Living God that we are serving now bless you all with His grace and mercy for your faithful partnering with us in carrying out the Great Commission in Southeast Asia and China.  We believe the power on your knees in prayers and the power of our feet in carrying out the Truth of the Gospel of Jesus’ redemption will turn the world of darkness into His Kingdom.