A new high-speed railway (made by China) is now operational in Laos. This news has been plastered all over Southeast Asia, and people, like flocks of bird, travel from far and wide to ride this new advanced mode of transportation. We, too, were excited! In Laos, it is now possible to take a 2 hour ride from the capital, Vientiane to UNESCO World Heritage Town, Luang Prabang (310km, 190miles). In the past, this would have taken 8 hours by car or even worst 14 hours by scooter. This high-speed train is a game changer!

In early June, as countries opened their borders, Stephen and Nick searched for plane tickets to Luang Prabang, which was how they usually went into Laos. The tickets were almost a 1000 US dollars per person; it was way too expensive, with that price, you could get round trip tickets to almost any country in the world. We were in a predicament because we had to go there to teach and accomplish several other tasks. As we prayed, we thought, why don’t we take a more affordable domestic plane from Chiang Mai to Northeastern Thailand and cross the land border into Laos? So, we packed our bags and headed out the door to embark on our first missionary journey since Covid began in 2020.

We took the hour and a half plane ride from Chiang Mai to Udon Tani. From there, we had to find a taxi that would take us to the border. Since this was the first time on this route, we had no idea what to do at all. Running around the Airport in Udon, we were looking for a taxi; we knew God was with us because we found the last taxi that would take us on the 1.5hour ride to the border. At the border, we ran into another problem, the whole immigration computer system crashed so we had to wait in line for an hour. Nevertheless, we made it across the border at 8:50pm just in time because borders close at 9pm.

This was our first time in the capital city of Laos, and the reason we came to Vientiane is because one of the evangelists, who has attended Stephen’s Bible classes, invited us to go and visit them. I mean, we were going to pass that place anyways, why not spend several days with them? He and his wife takes care of several college students who don’t have a place to stay in the city. His evangelistic center is a place of worship and also functions as a dormitory. All the female students shared one room and all the men shared another room. About 10 students live in this center. Many would probably view this as too crowded or a fire hazard but this is better than where most students usually stay. Most, if they didn’t have relatives to stay with, would rent a rundown tin shack; this leads to lots of issues like rape, theft, and violence.  This former student of Stephen has converted many college students in the recent years. This ministry is definitely growing and it’s very good to see the new Christian students take initiative in the chores, church, and evangelizing to their peers. It was definitely worthwhile as we saw the faith of these college students.

Part of our time in Laos was dedicated to Luang Prabang, so we went to try out this new high-speed railway, which was the fastest way to travel between cities as mentioned above. Anyways, we sent a student there in the morning to reserve our tickets but the ticketing staff said to just come back later and get the tickets before the train departs at 2pm. We arrived there at noon. All sold out! What were we going to do? This would throw off all of our plans because have to be in Luang Prabang that evening in order to start teaching the next day to the evangelists and pastors in the area… it seemed hopeless. We thought to ourselves, are we being tested again? It seemed like so, almost every day, something would come up that would make anyone nervous or upset. We prayed to ourselves as we tried to figure out our next move, and as we turned to go back to the center, a railway staff ran out to us and said there’s two more seats! Our God is good! So, Stephen and Nick left for Luang Prabang.

The train was a wonderful! The ride was as smooth as silk and the view of the countryside was a treat for the eyes. It was a great relaxing 2 hours. This is going to change everything. If you’ve been to Laos, you may know that roads are full of potholes and cracks. If someone were to travel from one town to another, it would use up at least a day even if it were only 60 miles away. What a blessing to have a new mode of transportation that would be more efficient… and a bit more comfortable.

As we arrived in Luang Prabang, we felt a sense of joy because we finally made it here after 3 years. Greeted by our local friends at the train station, we headed north to a rural town (50km, 30miles) which took 2 hours by car. The next day, we arrived at the classroom where we met about 40 Christian workers (pastors, evangelists) all ready to study. Nick taught a bit about pastoral counseling and also gave out personality tests so that they could find out more about themselves. They all enjoyed learning and understanding things about themselves like how some were introverted while others were extroverted. Stephen taught about the theology of the cross – the focus is that our belief revolves around the death, burial, and resurrection of Jesus Christ. The death, burial and resurrection of Jesus Christ is unique and the core of Christianity. Without the death, burial and resurrection of Jesus Christ, Christianity is no different from any other religion of the world.  After the short few days of teaching, we had to go back to Thailand. We received feedbacks from the students saying that they learned a lot and wished that we stayed and taught longer. During this trip, we didn’t have much time because there were other ministries to attend to in Thailand, but we plan to stay longer next time. Our trip to Laos was absolutely fruitful and encouraging!

After arriving back in Thailand, Stephen went to Pai, a town northwest of Chiang Mai, in order to consult the Thailand Lisu Association. Another reason to drive 4 hours to Pai was for Becky to meet a rehab specialist because Becky’s weak arm has been very tense. The Lisu meetings and therapy sessions for Becky in Pai were very positive. But on the day, they were to travel back home, Stephen all of a sudden felt faint and blacked out for several minutes. This occurred 2 times, so several of our relatives graciously drove Stephen and Becky all the way back to our house. The next day, the family took Stephen to a hospital to get checked up. The hospital did preliminary tests, and that’s when they found out Stephen had Covid (which based on the timeline was from his trip to Laos). Doctors don’t believe Covid caused the black outs but their policy was that they would run further tests after he recovered from Covid. As he recovered at home, we found out that Becky also got Covid. Fast forward 2 weeks of delegating all the tasks to Mary and Nick, they recovered and Stephen went back to do more tests and at this moment everything seems normal but the doctors says its most likely stress induced and he needs to take more time to rest. Further comprehensive tests are scheduled in a few months. Please pray for Stephen’s health.

As Stephen continues to recover at home, several pastors from the western border of Thailand asked for Stephen to go and teach the Bible to refugees from Myanmar. Many of these refugees immigrated into Thailand because of the escalation of war in their towns. Since Stephen can’t physically go, we prayed over it and decided to try a virtual class which we plan to operate in Laos in the near future. The idea was for a teacher (Stephen, in this case) to be able to teach remotely; this is due to the fact that in some areas, foreigners teaching Bible to locals are frowned upon. So, Nick drove 6 hours to Mae Sot, the western border town of Thailand and Myanmar.In Mae Sot, Nick set up his computer, speakers, projectors and microphone in the classroom. Connecting the setup to a wifi hotspot from a phone and calling Stephen via Zoom, our first virtual class was in session! Stephen also taught the theology of the cross in this class but at a basic level because most of these students are new Christians. We are so excited to have this new tool in our missions’ arsenal. In the future, it will be possible to have teachers teach remotely as long as there’s an internet connection.

In early June, Stephen lost his older sister. This was a great lost for the whole Wongratanamajcha clan because she is the oldest among Stephen’s siblings. It was her husband whom everyone thought would pass away because several weeks earlier, he fell very ill. Stephen and Nick traveled up to their village (6 hours northwest of Chiang Mai) and prayed for him; several days after, Stephen’s brother in law made a great recovery while Stephen’s sister passed away suddenly. Please pray for Stephen and his relatives as they are still going through grief.

Here are some of the other events that occurred in the past 2 months: 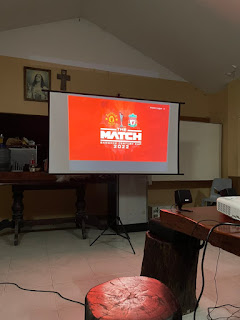 At the moment, everyone is doing well. We are really glad that Stephen is getting better. When Stephen and Becky both got Covid, Mary and Nick had to take care of all the chores and daily tasks. This has been an absolutely trying couple of months. Through highs and through lows, we praise God for always being with us. As countries open up, with God by our side, our team all ready to go, and powerful prayers and support from our faithful friends and family around the world --- it’s full steam ahead!!